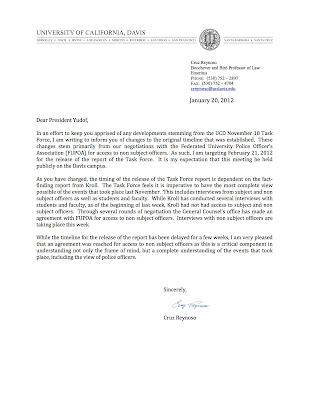 In an effort to keep you apprised of any developments stemming from the UCD November 18 Task Force, I am writing to inform you of changes to the original timeline that was established. These changes stem primarily from our negotiations with the Federated University Police Officer’s Association (FUPOA) for access to non subject officers. As such, I am targeting February 21, 2012 for the release of the report of the Task Force. It is my expectation that this meeting be held publicly on the Davis campus.

As you have charged, the timing of the release of the Task Force report is dependent on the fact- finding report from Kroll. The Task Force feels it is imperative to have the most complete view possible of the events that took place last November. This includes interviews from subject and non subject officers as well as students and faculty. While Kroll has conducted several interviews with students and faculty, as of the beginning of last week, Kroll had not had access to subject and non subject officers. Through several rounds of negotiation the General Counsel’s office has made an agreement with FUPOA for access to non subject officers. Interviews with non subject officers are taking place this week.
While the timeline for the release of the report has been delayed for a few weeks, I am very pleased that an agreement was reached for access to non subject officers as this is a critical component in understanding not only the frame of mind, but a complete understanding of the events that took place, including the view of police officers.