Fun to see how Resistance the Film is coming along ... teaser released

Did an interview a while back with Michael Graziano for a film he was working on -- "Resistance the Film" which is coming out soon. They released a trailer for the movie, and it has part of the interview with me as the narration ..

Email ThisBlogThis!Share to TwitterShare to FacebookShare to Pinterest
Labels: antibiotic resistance, films, interviews of me

Some new posts by, well, me, of possible interest

So - I am trying to get some new project specific blogs up and running and have been writing some posts at those sites.  And I thought I would just post a summary here of other posts I have written of possible interest.

Cool story from the Cornell News: Bacteria research inspires students' creative artwork | Cornell Chronicle.  It discusses a course taught by Prof. Greg Page "Introduction to Print Media".  As part of the course the students got a guest lecture from none other than Ruth Ley - who is a faculty member at Cornell and who does some of the most interesting microbiome work around.

Anyway - this guest lecture inspired some of the students in the course to make some microbial themed art works.  And the ones shown on the Cornell News site are wonderful.  Consider this one:
Image obtained from Cornell News.

I also love the lines from Ruth Ley on why she got involved in this and what she plans to do in the future.  Consider this:

“As part of my teaching at Cornell, I plan on training science students in the interpretation of concepts in visual arts and eventually even have them learn some basic skills for producing images or video,” Ley said. “I also want to bring science to fine arts students, and my collaboration with Professor Page was my first attempt at this.”

Things I don't understand episode 2000: Why in comparing humans & other animals the null hypothesis people always use (and thus try to disprove) is that humans ≠ animals

Well, this is something I just do not understand.  I am sure others out there have thought about this more than I have.  Just read this article: Considering the Humanity of Nonhumans - NYTimes.com discussing humans vs. non human animals.  And there is this extensive discussion in there about whether animals have self awareness, and whether they deserve legal rights, and such.  All very interesting I think.

But one part I do not understand.  It is very clear that humans and other animals have many homologous features.  It is very clear that humans are more closely related to some animals (e.g., primates) than to others.  For many comparative studies of animals, if one wants to claim that some animal has a feature that is different from it's close relatives, it is frequently up to the person proposing such a difference to disprove the null hypothesis that the close relatives are the same.  This is the case when studying molecular processes, cell structures, physiology, genome structure, and so on.

Anyway - there it is.  Something I do not understand.

Just got back from the CVS drug store in Davis, CA and thought I would share some of the probiotic promotion they are doing.  Not only are the probiotics now right next to the pharmacy counter (moving up in the world I suppose) but the probiotics are being marketed to all sorts of targeted groups.  Alas, the science behind the claims here are dubious.  And - sadly - CVS makes the disclaimer barely visible in many of the signs. 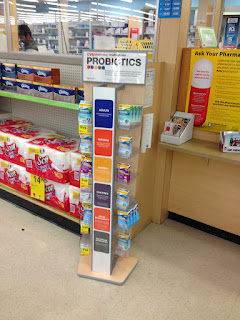 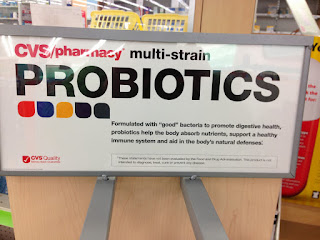 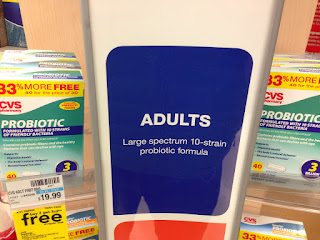 Email ThisBlogThis!Share to TwitterShare to FacebookShare to Pinterest
Labels: probiotics

Transitions in the CAMERA metagenomics database ---

Just got this email announcement that I thought would be of interest:

Thank you for being a CAMERA user during its first phases of operation as aresource for environmental genomics. During the past few years, CAMERA hasbeen able to offer a number of important community resources, including anexceptionally well curated environmental genomic database, the ability forresearchers to deposit molecular sequence datasets with associatedenvironmental parameters (metadata), open access to computational resourcesto enable metagenomic comparisons, educational resources and helpdeskservices. These efforts have been funded through the Gordon and Betty MooreFoundation (GBMF) Marine Microbiology Initiative and the National ScienceFoundation to serve the needs of the marine microbiology community andother users.As we announced earlier this year, CAMERA is undergoing a transition,shifting from the Testing and Development phase of CAMERA 2.0 into multipleentities that are supported by federal and foundation-funded projects fordeveloping and managing databases. Toward this end, we are re-prioritizingaccess to the advanced data analysis capabilities of the system (see below)while maintaining free and open access to CAMERA’s rich collection ofcurated data and metadata. This will involve CAMERA being restructured intoa publicly accessible Data Distribution Center consisting of a simplifiedwebsite to enable streamlined access for downloading of sequence datasetsand associated metadata. This new interface will serve as an intuitivelyaccessible central repository, facilitating direct access to genomic,metagenomic, transcriptomic, and metatransciptomic projects. Further, theCAMERA 3.0 database will continue to grow and be maintained with theinclusion of additional marine microbial datasets, such as the ~700 newmarine microbial eukaryote transcriptome datasets as part of the MarineMicrobial Eukaryote Transcriptome Sequencing Project(marinemicroeukaryotes.org).In the past, the CAMERA 2.0 compute resources, which include large-scaleBLAST capabilities and other workflow-enabled analysis capabilities, weregenerously supported by the GBMF, the San Diego Supercomputer Center, theNSF XSEDE program, and commercial Cloud computing resource providers,Amazon and CODONiS. Due to increasing computational costs and the need forscalability to larger, more complex datasets, it is now necessary forCAMERA 3.0 to adopt a resource access model wherein projects will need toidentify sources of funding to cover their use of these advancedcapabilities. Starting January 1, 2014, CAMERA 3.0 will no longer offer theuse of computational resources to projects that cannot identify a source ofsupport for this component of CAMERA 3.0 services. As we shift to this newusage model, we urge current users to download and save customized datacart holdings and workflow analysis results before January 1, 2014.While we are shifting to a restricted resource compute model, we willcontinue to improve the capabilities of the system to expand the scientificbreadth of the data managed by CAMERA 3.0. For example, CAMERA 3.0 includesfully functioning workflows for Illumina datasets, which can be madeavailable to those users who can identify a source of support for theassociated computational costs. In addition, CAMERA is actively seekingresources to continue to take community data submissions. If you are nowcollecting or have plans to collect data which you wish to deposit inCAMERA, we urge you to contact us to help you to determine how to obtainthe resources required for these data to be archived and made availablethrough CAMERA. 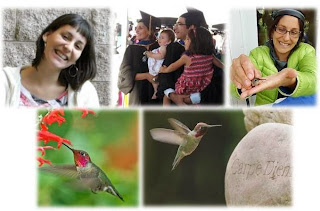 I received tonight an email from Dr. Holly Ernest, a colleague of mine who is a Professor at UC Davis and I am posting it below. The email relates to a fundraiser for a Memorial Fellowship in honor of Loreto Godoy who was a PhD student here at UC Davis in the Graduate Group in Ecology.  She tragically died this summer in a car crash that also took the life of her husband's parents.  The email relates to a fund that was established in her honor - which needs only an additional $5000 to become a permanently endowed fund at UC Davis.  Holly Ernest was her PhD Advisor and I encourage everyone to read the email below and consider donating to the fund.  Life is so incredibly tragic sometimes.  Loreto was not just a brilliant scientist, but also a wonderful person and a mother of two young girls.  But hopefully through this fellowship some good things can happen for others and her memory can live on.


Our dreams for a permanently endowed Loreto Godoy Memorial Fellowship are nearly realized.

This fellowship is intended to be awarded regularly to UC Davis graduate students who exemplify Loreto's ideals. Loreto was a PhD candidate in the Ecology Graduate group, brilliant scientist, a loving mother of two little girls, Chilean, veterinarian, and all-around wonderful sunny person.

In order to help us reach our goal of endowing the fellowship and having a lasting legacy of Loreto's wonderful and generous life, my husband Bruce and I are making another gift of $1000 to help inspire others to donate (any size donation is very welcome).

With this donation and that of a new anonymous donor, the fund is now at $20,000. It needs to reach $25,000 to be permanently endowed by UC Davis for a lasting legacy to Loreto's memory.

Please consider joining us to reach this goal!

Also - please feel free to share this email so that others can get involved.

Please send checks to the following address, and write, "for Loreto Godoy Fellowship Fund" in subject line of check:

Questions can be directed to Janet by email jsberry@ucdavis.edu or phone (530) 902-1624. If you prefer to pay by credit card, you may also call Janet at this number in order to provide this information.

(Note by Jonathan Eisen - donations can also be made via the online site http://www.gofundme.com/loreto-godoy-scholarship).
- December 03, 2013 No comments: