My non supportive response to "All Biology is Computational Biology"

Round up of responses to my sign captioning request

Round up of responses to my sign captioning request

Umm - I really do not know what to say here. There is a new incredibly exciting paper out on Neanderthal oral microbiomes.

I saw some news stories about a new study on Neanderthal oral microbiomes. And one thing caught my eye - a claim about how the data provided evidence that Neanderthal's and humans were kissing each other.
See for example the LA Times: Vegetarian Neanderthals? Extinct human relatives hid a mouthful of surprises - LA Times


The scientists also managed to sequence the oldest microbial genome yet — a bug called Methanobrevibacter oralis that has been linked to gum disease. By looking at the number of mutations in the genome, the scientists determined it was introduced to Neanderthals around 120,000 years ago — near the edge of the time period when humans and Neanderthals were interbreeding, Weyrich said

There are a few ways to swap this microbe between species, she pointed out: by sharing food, through parental care, or through kissing.

“We really think that this suggests that Neanderthals and humans may have had a much friendlier relationship than anyone imagined,” Weyrich said. “Certainly if they’re swapping oral microorganisms — or swapping spit — it’s not these brute, rash-type encounters that people were suspecting happened during interbreeding. It’s really kind of friendly interactions.”

And Redorbit: Neanderthals were vegetarian– and probably kissed early humans 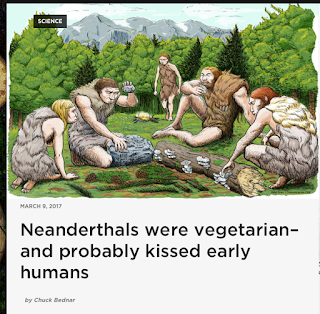 Another surprise was the discovery of the near-complete genome for Methanobrevibacter oralis, a microbe known to live between the gums and teeth of modern humans, in the dental calculus of the Neanderthals. Weyrich said that this organism is the oldest of its kind to ever be sequenced, and that its existence in Neanderthals means that it had to have been spread to humans somehow – likely through kissing, which supports the growing notion that humans and Neanderthals were known to become intimate with one another on occasion. 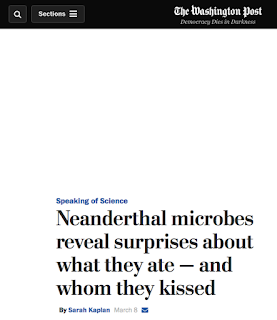 
“In order to get microorganisms swapped between people you have to be kissing,” Weyrich said.

And many others.  Now - this seemed like it would be really hard to prove.  After all, it is really hard to prove from microbiome data that two people have been kissing even when we have high quality data from many samples and even when we have data from both the possible donor and recipient.  So how could one show that humans and Neanderthals were kissing with data from ancient samples and only from one of the partners in the putative exchange?  Well, as far as I can tell, you cannot.

Sadly the paper is not open access and I generally avoid writing about closed access papers here. But I am making an exception here because the media has run with what I believe to be an inaccurate representation of the science.

So I went to the paper.  Neanderthal behaviour, diet, and disease inferred from ancient DNA in dental calculus.  I have access to it at UC Davis but if you do not have access to it, you could search for it in SciHub (for more about SciHub see Wikipedia).  I am not encouraging you to use SciHub - a site that makes papers available view what may be illegal means in some countries.  But if you want to see the paper, and you have determined that you are OK with using SciHub, well, that is an option. This is a link that might get you access in SciHub, if you wanted to do that.

Anyway - I read the paper.  And it really is quite fascinating.  It has all sorts of interesting information and really does represent an incredible tour de force of both lab and computational work. Kudos to all involved.  But alas, there is nothing in the paper about kissing. If you search in the paper for the word kiss - it is not found. The possible transfer of microbes between Neanderthal and humans is briefly discussed however.

From what I can tell, what they did here was the following:


It is cool and very interesting stuff.  See this figure for example. 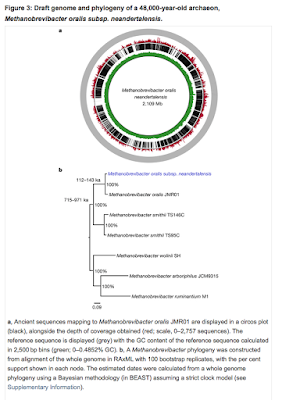 And then based on this they write:


Date estimates using a strict molecular clock place the divergence between the M. oralis strains of Neanderthals and modern humans between 112–143 ka (95% highest posterior density interval; mean date of 126 ka) (Fig. 3b; see Supplementary Information). As this is long after the genomic divergence of Neanderthals and modern humans (450–750 ka)29, it appears that commensal microbial species were transferred between the two hosts during subsequent interactions, potentially in the Near East30.


So they are inferring transfer of commensal microbes based on molecular clock dating from one single M. oralis genome from Neanderthal and one from humans and a comparison of the inferred dating of their common ancestor versus the timing of supposed divergence between humans and Neanderthal. Personally it seems like a big big stretch to make that inference here. What if the dating from their analysis is off (such dating estimates are generally highly debated and unclear how accurate they are)?

Interestingly, the genome they used to compare to Methanobrevibacter oralis JMR01 actually came from a fecal sample and not an oral sample - see Draft Genome Sequencing of Methanobrevibacter oralis Strain JMR01, Isolated from the Human Intestinal Microbiota. So this microbe is not solely found in the mouth and it apparently can survive transit between the mouth and another orifice, and may even be a gut resident (i.e., not just transiting).

So anyway - it seems woefully premature to conclude that the data they have here provides evidence for exchange between humans and Neanderthals of M. oralis. Could have occurred. But also could be separate colonization from similarly environmental sources.


This There is really amazing science in this work. But the kissing claims are premature as far as I can tell (I honestly hope I am wrong and that there is more data than presented in the paper, but if there is it should be presented somewhere - or maybe I have misinterpreted the paper - but I don't think so). If the claims are as premature as they seem to be, this is damaging in my mind to the field of microbiome science.
-----------------------------

Thanks to Ed Yong for updating his Atlantic article on this story to add a reference to my concerns.


But after the paper was published, and several publications noted Weyrich’s suggestion about kissing in their headlines, Jonathan Eisen from the University of California, Davis, expressed skepticism about the claim. “Maybe the M. oralis comes from food,” he wrote in a blog post. It could have been picked up independently from the environment, or from water contaminated with feces, or from other kinds of sexual contact. A kissing route “it is just one of many and it relies upon a lot of conclusions for which the evidence is tenuous at best,” Eisen said.


UPDATE 2 - Made a Storify of some responses

OK it is only 15 years after the fact but am posting some videos from the  2002 Galapagos Rift Expedition I went on May 24 - June 4, 2002.  It was the cruise honoring the 25th Anniversary of the discovery of deep sea hydrothermal vent ecosystems.

For more information see the web site from Dive and Discover

Here is a playlist with all my videos, some from the cruise and some from the Galapagos Islands where the cruise started / stopped.  I have not edited any of the videos - just digitized everything from the tapes and posted them.  Apologies if anything is, well, inappropriate for any reason.