Nina Jablonski talk at #UCDavis on Evolution of Skin Pigmentation

3/9 at #UCDavis: Workshop: Authorship and the Promises of Digital Dissemination 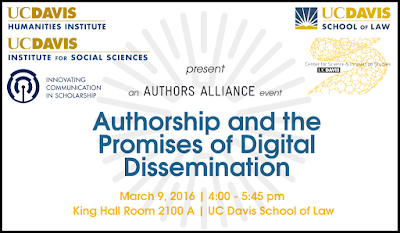 AUTHORSHIP AND THE PROMISES OF DIGITAL DISSEMINATION
Wednesday, March 9, 4:00- 5:45 pm
UC Davis School of Law, King Hall, Rm 2100A
A cross-disciplinary panel discussion on authorship in the digital age, with a focus on the specific goals and needs of academic authors. Authors who write to be read care about how their works are published and what that means for reader access. While traditional options and copyright arrangements still predominate in many fields, there are ever-increasing ways to share works of authorship. What works best to get textual and visual works out there and under what circumstances? Join us for this panel discussion with Authors Alliance, where we will explore the opportunities and challenges authors face in maximizing the reach of their work, both in and outside of academia.

To be filled in for any NSF grant.

In order to meet the requirements of the benevolent, wise, and all knowing HR 3293, it is hereby declared in this written declaration that this National Science Foundation grant has been determined to

1) Be eminently worthy of Federal Funding

2) Is without a doubt in the national interest, as indicated by having the incredibly high probability of achieving: [Insert here one or more of the following]

So I discovered a few days ago I had dozens of new publications in 2015.  Cool right?  Here is a screengrab: 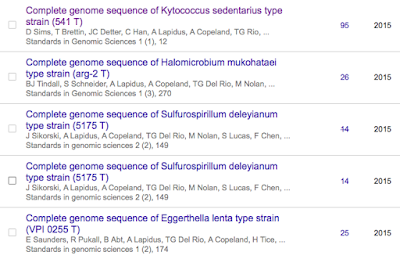 And here is another 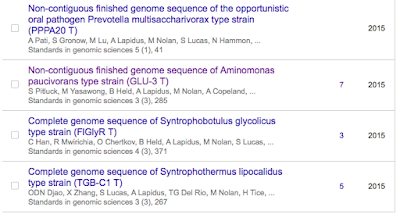 Until I realized, well, those were published years ago.  WTF are they doing being listed as 2015?  Clearly some glitch. And then I saw a few Tweets that pointed me to figuring out what was going on.

so @ClausWilke @austingmeyer @carolinefarrior I have whole slew of these that showed up in my pubs today pic.twitter.com/MAwCOsxhrE
— Jonathan Eisen (@phylogenomics) February 2, 2016

.@ClausWilke @austingmeyer @carolinefarrior all are papers published while ago that were switched to new publisher site & GS got confused
— Jonathan Eisen (@phylogenomics) February 2, 2016


And some discussion followed

@austingmeyer It's not that simple, actually. They can occur legitimately with preprints. @phylogenomics @carolinefarrior
— Claus Wilke (@ClausWilke) February 2, 2016


Fascinating. But I knew my papers were not published as preprints. And that they were published years before Google Scholar was not listing them as being published.

So - what happened? I think I now. These papers were all published in one journal - Standards in Genomic Sciences. The journal used to be published semi-independently by the Genomics Standards Consortium. Then they were transferred to / bout.
ht by / merged with Biomed Central and even the web address was forwarded to BMC where they host the archive of articles from before the transfer.  Then there is a new site with articles from after the transfer.

So when I click on the articles from the Google Scholar site I get to a strange thing.  The articles published before the transfer are also listed on the new site http://standardsingenomics.biomedcentral.com/.

For example - the Complete genome sequence of Sulfurospirillum deleyianum type strain (5175T) is shown here with a 2015 publication date:

Although note the Copyright 2010 little bit.  Which is interesting since this paper was in fact published in 2010.  And you can find it on the other site http://standardsingenomics.org with a 2010 publication data here. 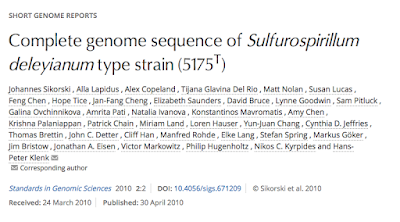 And also in Pubmed and Pubmed Central.

So - even though Biomed Central says the new papers will be in the new site and the old papers will be ket in a separate site that is not what is happening.

For some reasons some of the older papers are now being listed in the new site with a new publication date.  And I assume because Google Scholar scrapes from the journal sites, it found the "new" papers and has now added them to it's clustering collection and has fed them into my publication list.  And despite trying I am not sure how to fix this.

I tried to "unmerge" the new publications to see if somehow the old publications showed up.  But they did not.  So .. am not sure what to do here other than to send this to BMC and Google Scholar, which I will do.  Ahh - the perils of automated systems ...

I note -  this does seem to have possibly temporarily increased my total number of citations since it seems like some of these papers are now being considered twice by Google Scholar but not sure about that.  More digging.