What to do when your sick? Sickblogging (and a little bit about Adm. Dennis Blair)

Well, I have had some unpleasant winter bug that on top of everything my kids seems to have or at least have something similar.  It has been fun at night here to say the least.  I was hoping to get some work done over winter break especially since I was overwhelmed with teaching in the fall quarter.  That is not happening.  But in the few moments of peace here, I have looked for something to do --- and hey there is one thing I could do with only a little time.  Blogging.  And of course I am not alone in this.  So here are some links to others on sickblogging:
And what have I to say today?  Not much but here is a preview of things to come.  I have a feeling that Obama is stalking me scientifically.  Why?  Well, I am one or two steps removed from a huge number of his appointees and I plan to write about them in the next few weeks once I get better.  One things the science bloggers might not have heard about is the passion Adm. Dennis Blair has for science.  Dennis Blair is Obama's pick for DNI (Director of National Intelligence) and I know him through a program called the Defense Science Studies Group (DSSG).  I will write more about this later, but what I can say here is I think Blair is a brilliant pick by Obama.  Not only does he have a strong military and intelligence background, but more importantly to me, he believes in evidence, and is a strong supporter of science.  And below is a little pic of me getting my certificate from Adm. Blair. 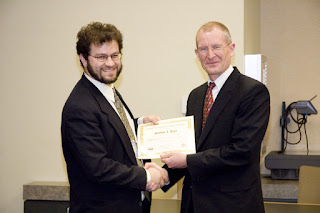 Email ThisBlogThis!Share to TwitterShare to FacebookShare to Pinterest
Labels: sickblogging

An interesting new paper in PLoS Genetics (PLoS Genetics: The Population Genetics of dN/dS) by Sergey Kryazhimskiy and Josh Plotkin that discusses the use of the widely used parameter dN/dS (in essence a measure of the ratio of non synonymous to synonymous substitutions in protein coding genes). This parameter is commonly used to estimate the type of selection that has occurred in a protein coding gene.

Here is their summary of their article:

Since the time of Darwin, biologists have worked to identify instances of evolutionary adaptation. At the molecular scale, it is understood that adaptation should induce more genetic changes at amino acid altering sites in the genome, compared to amino acid–preserving sites. The ratio of substitution rates at such sites, denoted dN/dS, is therefore commonly used to detect proteins undergoing adaptation. This test was originally developed for application to distantly diverged genetic sequences, the differences among which represent substitutions along independent evolutionary lineages. Nonetheless, the dN/dS statistics are also frequently applied to genetic sequences sampled from a single population, the differences among which represent transient polymorphisms, not substitutions. Here, we show that the behavior of the dN/dS statistic is very different in these two cases. In particular, when applied to sequences from a single population, the dN/dS ratio is relatively insensitive to the strength of natural selection, and the anticipated signature of adaptive evolution, dN/dS>1, is violated. These results have implications for the interpretation of genetic variation sampled from a population. In particular, these results suggest that microbes may experience substantially stronger selective forces than previously thought.

The key to me is that it seems that many may have been using dN/dS ratios inappropriately when comparing samples within a species. For more, well, see the paper.
- December 16, 2008 8 comments:

Well, say what you will about Steve Chu, but the fact that Obama has nominated him to be the Secretary of Energy is only a good sign for science and society as far as I am concerned.

It is a good sign for science because it shows explicitly Obama's respect and support for science. Most recent Secretaries of Energy have been non scientists (the #s depends on whether you count an engineer as a scientist - I do - but some don't) and Bush (who I want to say is out previous president but we still have him for another month) does not believe in evidence in any way, let alone science.

It is a good sign for society because it is important for the president to understand and respect science. So - some may criticize Chu for some issues - but none of the criticisms I have seen really hit home with me. Sure, I would like a Biologist in their in the Cabinet, but Chu seems to actually understand that the biological diversity of the planet is under threat from global change and he wants to do something about it. I cannot really ask for much more from a Physicist/Administrator. For full disclosure - I have an Adjunct position at LAwrence Berkeley Lab where Chu just happens to be the Director. So maybe I am not completely objective, but anyway, I think this is a good day all around.
- December 15, 2008 5 comments:

Everyone interested in Open Access and the open spread of information should check out the new video from the Creative Commons folks. This is being released as part of a fundraising campaign for Creative Commons  and I recommend that people consider donating to this great organization.  As a side note, the video was directed by Jesse Dylan, the director of the Emmy- award winning "Yes We Can" Barack Obama campaign video and features musical artist will.i.am from the Black Eyed Peas.
- December 13, 2008 No comments:

There is some relatively outdoor art at Robbins Hall at UC Davis. The art features plants, evolution and DNA -- things I dig. Here are some pics.

The only issue I have is that they did not highlight the bacteria that should be present on the bean roots (legumes fix nitrogen via nitrogen fixing bacteria that hang out in nodules in the roots). But if we take an artistic interpretation of the bean roots, some of the little black triangles there can be considered root nodules.

Anyway, just thought I would share the pics. The art is worth checking out if you are in the area.

Well, the world works in mysterious ways. April 1 this year, I coordinated a blogosphere hoax regarding the NIH cracking down on brain doping. See Confessions of an April Fool and the Dope on Brain Doping for more detail. And then Nature and many other publications wrote about brain doping when Nature published the results of a survey suggesting many academics take cognitive enhancing drugs. And now, perhpas most interestingly, a group has written a letter to Nature has published a commentary arguing for more research into " responsible use of cognitive-enhancing drugs by the healthy"

Like all new technologies, cognitive enhancement can be used well or poorly. We should welcome new methods of improving our brain function. In a world in which human workspans and lifespans are increasing, cognitive enhancement tools — including the pharmacological — will be increasingly useful for improved quality of life and extended work productivity, as well as to stave off normal and pathological age-related cognitive declines. Safe and effective cognitive enhancers will benefit both the individual and society.

But it would also be foolish to ignore problems that such use of drugs could create or exacerbate. With this, as with other technologies, we need to think and work hard to maximize its benefits and minimize its harms

On the one hand I agree that more work in this area is good. On the other hand, people compete all the time based upon cognitive performance. The article discusses thesae and other issues and is worth looking at. As I am on Campus right now I am not sure if the letter is Open Access or not, but I hope it is.

Aphid-bacterial symbiosis in more detail, and in the New York Times

Nice little bit in the New York Times tomorrow about aphids and their symbionts. Henry Fountain writes (Observatory - How Tiny Insects, With a Little Help, Survive on Plant Sap - NYTimes.com) about a new article by Angela Douglas, one of the true pioneers of endosymbiont research. In her study she dissects in fine scale detail which essential amino acids are missing from the aphid sap only diet and which ones are made by the symbionts. Interestingly, the research apparently shows that the aphids may have figured out how to make methionine by themselves. I say apparently since I have been unable to track down the paper which I assume is coming out soon.

I should note, in one of the symb

ioses like this that I have studied with Nancy Moran we found that there were two symbionts contributing to the nutrition of the host. We found that one of the symbionts was likely making amino acids for the host (an insect called the glassy winged sharpshooter which eats only xylem sap) and the other symbiont was likley making vitamins. Nancy showed later with John McCutcheon that the symbiont that was making vitamins also was predicted to be making methionine for the host. So it seems possible there might be a missing symbiont in the aphid study? Although it would be cool if the aphid has figured out how to make an amino acid most animals are not able to make.

Hat tip to Max Lambert for pointing this out.

Email ThisBlogThis!Share to TwitterShare to FacebookShare to Pinterest
Labels: symbioses

Just a quick recommendations for a gift for this holiday seasons that seems cool (metaphorically and literally). It is the climate kit. It comes from a friend of mine from college, Kathy Washienko and this is some of their text:

Kits are convenient collections of tools and tips that will help your family and friends reduce your environmental impact. By grouping what you need in one handy package, a kit makes it easy and fun to take energy-saving steps. Each kit is ultimately a gift to our environment, but will also save you money in reduced energy costs.* And every kit comes with our innovative "rebate." Check them out!

Sounds good to me. And given that I am trying here to promote trees (albeit phylogenetic ones, not real ones) I like that they are planting a tree and trying to be green.
- December 08, 2008 No comments:

Email ThisBlogThis!Share to TwitterShare to FacebookShare to Pinterest
Labels: Rice

Interested in Department of Energy-related missions such as global carbon cycling, alternative energy production, and biogeochemistry? And want some genomes, metagenomes, or other things sequenced that are relevant to these topic areas? All you have to do is write a proposal to the Joint Genome Institute (JGI) Community Sequencing Program, get it selected by the review committee, and then the JGI will do the sequencing and some analysis for you.

UC Davis giving further props to blogs (mine that is) 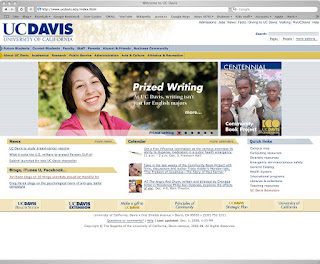