Well, I can't even begin to explain how disappointed I am in AAAS and Science Magazine over their actions recently. An "opinion" article was published last week in the "Working Life" section of Science which was stunningly inappropriate for Science Magazine. I first found out about this when I saw a Tweet from a colleague and friend Rebecca Calisi Rodriguez.

I recently had a great experience publishing in @sciencemagazine's Working Life section on supporting mothers-in-science. Angry to see this now published- a personal, sexist attack on one woman (who is actually AWESOME at #Scicomm). A step back for #WomenInSTEM. Good thread here: https://t.co/KdVSqll3Rg
— Rebecca Calisi Rodriguez (@BeccaCalisi) March 15, 2018

And when I started to dig into the story I was nauseated.

To sum up - the article was by a student who was apparently trying to express some thoughts about #SciComm activities by others that she did not like. And in the piece she named and mocked the activities of another PhD student at her own institution who does SciComm in ways she does not feel comfortable with. Fortunately, when I started looking at social media responses to this, they were overwhelmingly in support of this targeted student - Samantha Yammine who does really quite phenomenal SciComm work. (See for example her Twitter feed and her Instagram feed.

I am really thrilled and proud of the community that came out in support of her.

There have also been a few news stories related to or directly about the topic which are worth reading. 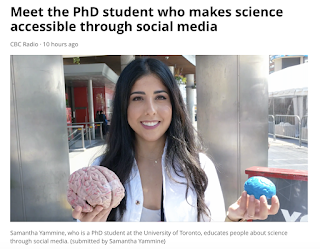 Also some of the Tweet streams about this are really worth reading. For example, this one from @christineliuart is a must read:

NEWS FLASH: my self-expression does not exist for you. Do not police the way I choose to interact with others and share my existence because it makes you bitter. You do you, but don't write an op-ed about why you dont want me doing me.
https://t.co/kAMulZJ6vV
— christine liu ✨ two photon art (@christineliuart) March 15, 2018


I ended up compiling some of the Tweets about this topic in a Twitter Moment which I share below. Another @ScienceMagazine major fail w/ offensive, sexist hit piece

Hopefully, the student who wrote the article will rethink many aspects of it and hopefully she does not suffer major repercussions from writing this misguided piece.  And though she originally seemed to be defending the article she eventually at least posted an apology to Sam.

I want to apologize for singling you out in my essay Samantha. I am sorry for any grief this has caused you or may cause you in the future.
— Meghan Wright (@meghaneewright) March 16, 2018


However, there is one part of the story that I believe is in need of a major, detailed examination.  And that is the role of Science Magazine in all of this.  I went on a bit of a rant about this on Twitter when I and other people found that Science's response to the controversy was insufficient.  I embed my posts about that below.

But this response seems, well, drastically insufficient. For example, @sciencemagazine are you going to review the article itself? Is it being edited? Retracted? Anything?
— Jonathan Eisen, Guardian of Microbial Diversity 💥🔆 (@phylogenomics) March 18, 2018

And also @sciencemagazine - did you apologize to the target of this article? Seems like you should
— Jonathan Eisen, Guardian of Microbial Diversity 💥🔆 (@phylogenomics) March 18, 2018

And while you are at it, @sciencemagazine you might want to consider apologizing to the author of the article for allowing this to be published too - you could have done better for her also
— Jonathan Eisen, Guardian of Microbial Diversity 💥🔆 (@phylogenomics) March 18, 2018

And also @sciencemagazine how about reviewing ALL your editorial processes not just those for Working Life articles
— Jonathan Eisen, Guardian of Microbial Diversity 💥🔆 (@phylogenomics) March 18, 2018

And furthermore @sciencemagazine - self examination here is nice but insufficient - you need to explain to the community what you find, how this happened, and how you will prevent it from happening in the future
— Jonathan Eisen, Guardian of Microbial Diversity 💥🔆 (@phylogenomics) March 18, 2018

As an elected member of the @AAAS Council I am going to do what I can to make sure there is a real investigation into this debacle and a public disclosure of the findings
— Jonathan Eisen, Guardian of Microbial Diversity 💥🔆 (@phylogenomics) March 18, 2018

So I started to dig around into what I could do and then I got an email from the Editor in Chief of Science. Apparently, after publishing an article that directly critiqued a PhD student in public in his own magazine he was uncomfortable with responding in social media.  I am not sure whether Jeremey Berg thinks these emails should remain private but I do not think that.  So I am posting my exchange here.

Hi Jonathan: I would like to understand better your views on the Working Life column but I do not think Twitter is the best forum for this. The full Editor’s note is shown below:

Editor's note, 17 March, 12:45 p.m.: In setting the context in this opinion piece, an individual (Science Sam) was identified and many have read the article as a personal attack. This was not the intent of the author or the editors, and we apologize. We are examining our editorial process for these pieces moving forward.

This is an honest assessment of what happened. The author’s concerns about what she perceived as an expectation for her, as a woman, to participate in a certain type of science communication was driven by promotion of this on her campus.

In retrospect, the piece should have been edited so that the person was not identified, but it was not intended to be an attack and was not read this way by several editors and many other readers.

What do you think will be accomplished from “a more thorough investigation”?

I welcome your thoughts.

So I wrote back immediately

Thanks for the email.

1. The author said on Twitter she worked extensively with an editor to craft her piece. I think it is important to know if it was ever discussed that she identified a specific person for her critique and whether they considered that to be a good or a bad thing. For that matter, how was this introduced to the piece - did it come from the author or from the editor?

2. Does Science Magazine have any policy of any kind regarding personal attacks / critiques like this? If yes, were they ever considered in this case? If no, why not?

3. During the editing process, was there ever a discussion of how to get more attention to the piece? I can only assume yes so in that context what was discussed? Did the mocking, demeaning wording come from the editor or from the author and why was it not removed?
4. Why was it deemed reasonable for such a piece to repeatedly disparage outreach efforts of others? Is this a useful thing to publish in this space?

Some examples
I believe there is no way to interpret this other than an attempt to shame people like Sam. This basically is saying "you cannot do this - you are to be shamed for focusing on such things".

And that is disgraceful.

5. Are you and Science going to publicly apologize to Sam?

6. Why does this piece not suggest alternative uses of Intagram? Why is it just attacking what other people do?

And much more. I think this article, being published in Science, with the editing help of Science, is in need of a thorough investigation to find out why it ended up the way it did. Why was there a personal attack left in? Why was it deemed OK to mock other people? Why could it not instead have focused on positive suggestions for how to do outreach in other ways that maybe Meghan was OK with? And so on.

I encourage you to have a more public, open discussion of how this happened and how you might try to prevent it from happening again.

And eventually I got a response back from Jeremy


Hi Jonathan: Thanks for your response.

The story unfolded as described in the piece. The author was introduced to Science Sam’s Instagram efforts at a career workshop, started looking into this and other Instagram accounts, found herself uncomfortable with the content and her perceived expectation that she follow suit, and did some self-reflection to conclude that she resented the implications regarding the underlying issues related to women in science. Based on this, the author wrote her essay and submitted it to Science Careers. Her experience with Science Sam’s Instagram account was always a central part of the essay. The editing process involved working with her on the writing to help make her message clearer. There was no attempt to get more attention to the piece or to make it more inflammatory.

I think the perspective that some young female scientists feel pressured to participate in science communication efforts, particularly those of a specific type, is an interesting one. I do not read this as an attempt to disparage the efforts of others but rather to explore the basis for the author’s reactions to these efforts.

We have both publicly and privately apologized to Samantha.

As I said in my earlier email, in retrospect, we should have explored ways to avoid naming an individual specifically in the essay, both to avoid the appearance of an attack and the loss of the message of the essay over this issue. As we indicated in the Editor’s note, we are examining our processes related to these pieces.

It did not, well, make me feel like Science was going to be doing anything. And many parts of the response I find troubling.  But I could not deal with all of that.  I focused on what they planned to do in terms of looking into what happened and wrote back.

I have many questions and comments and concerns about your response here but want to focus on one issue.

What do you mean by "we are examining our processes related to these pieces." Can you say more about your plans in this regard?

And I got back an even more disappointing response


Hi Jonathan: At this point, there is not much more to say. The people involved in the process will meet and discuss whether we need to do anything differently to avoid potential problems in the future.

So - basically, it looks like Science Magazine will do nothing. They published an inappropriate article targeting a single PhD student and that article was also loaded with a variety of sexist misguided attacks on specific types of science communication.  And they won't discuss this on Twitter because it is not the right place to discuss it.  And then by email they basically state "We will privately look into it and not tell anyone."

That is just not enough.  I plan to pursue this further via AAAS and see if a formal, perhaps outside review can take place.
- March 19, 2018