I am going to be running a journal club this quarter at UC Davis for the Population Biology Graduate Group.  The topic is Co-evoution of Microbiomes and Hosts.


A link to the Draft Outline is here. And I am trying to embed it in this post ...


If anyone has other ideas for interesting papers on co-evolution of microbiomes and hosts, please let me know and I will add them to the list. Stay tuned as each week I will post about the discussion topics and notes from the discussions.
- September 28, 2015 3 comments:

I spend a decent amount of my blogging time these days writing posts for microBEnet (the microbiology of the built environment network) which is part of a project funded in my lab by the Sloan Foundation.

Some recent posts that may be of interest are listed below:

Today's awful overselling of the microbiome - Robynne Chutkan on libido 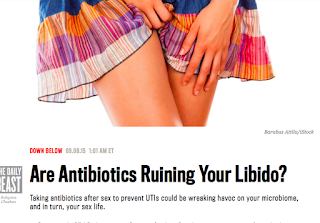 Well, this is just plain awful Are Antibiotics Ruining Your Libido? - The Daily Beast.  In this article, Robynne Chutkan argues that people's sex drives may be being ruined by antibiotics.  And she presents zero evidence for this other than handwaving.

Some things in this article that are inaccurate:


We’ve spent most of the last century figuring out how to eradicate our microbes, and we’re just now realizing that the vast majority are friends rather than foes that actually play a vital role in keeping us healthy.

How about this section:


Most of the patients I see suffer from manifestations of an imbalanced microbiome—a condition known as dysbiosis. Some of the signs and symptoms are localized to the GI tract, like bloating and gas; but others, including yeast infections, brain fog, fatigue, rashes, joint pain, anxiety, food cravings, allergies, and autoimmune disorders, reflect the universal role our microbes play in preventing disease

Well, based on this statement I would certainly recommend nobody see Dr. Chutkan for any of their medical treatment.  What exactly is the evidence "brain fog" is caused by dysbiosis?  Or fatigue?  Or anxiety?  Or food cravings?  (Yes, I agree that some of the other things listed have been shown to be affected by the microbiome, but each of these (e.g., allergies) is influenced by many many factors and as far as I know there are no scientific studies that show that one can look at people suffering from any of these ailments and determine if their microbiome has caused their problems or not.

And then there is the discussion of microbiomes, antibiotics and sex life:


And what’s more, a healthy, balanced microbiome is essential for a healthy, satisfying sex life.


But there’s another alarming, but hidden epidemic of dysbiosis that’s occurring, and it may be wreaking havoc on your sex life. It’s the common practice of taking antibiotics after intercourse to prevent urinary tract infections (UTIs).


If you’ve been using antibiotics to prevent post-coital UTIs and you’re finding that sex is less enjoyable than it should be, your vaginal microbes might be in need of some rehab. I recommend a three-pronged approach of avoidance, encouragement and repopulation


It may take some time before you see meaningful results, but this approach offers the possibility of real and lasting relief, rather than an antibiotic quick fix that ultimately ends up being ruinous to your sex life.

The problem with this is that she presents no evidence that alterations int he microbiome affect libido or sex life and no evidence that her recommended solutions (e.g., probiotics and prebiotics) help with such symptoms.  So, yes, overusing antibiotics is a risk we should limit as much as possible.  But no, lets not glorify microbiomes and overcritique antibiotics by making people worry about their sex drive and sex life without evidence.  That is not helpful and could be harmful.  For this I am giving Robynne Chutkan a coveted overselling the microbiome award. 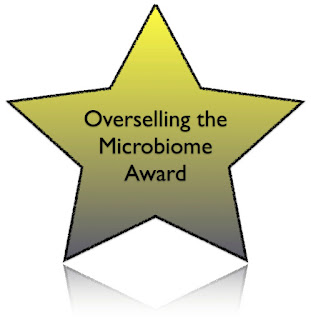 For more on this award see here.

In college, I switched from being an East Asian Studies major to being a Biology major in my sophomore year but had no idea what aspect of biology I might focus on.

Then I took a course that changed my life. The course was taught by a PhD student at Harvard and it was a kind of supervised reading class. The course was a full year class with weekly meetings to discuss various papers and news stories and such.  The topic was "The Origin of Life: Catalysis in Evolution" and it covered things like chemical evolution, catalytic RNA, the RNA world, introns, Lamarck vs. Darwin, and more.   The course syllabus is posted below: 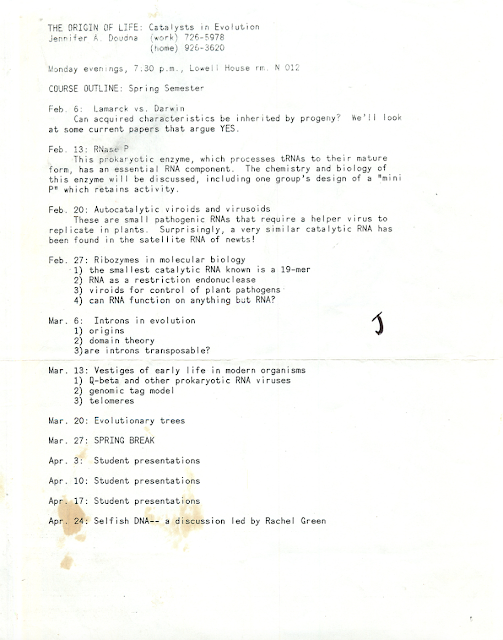 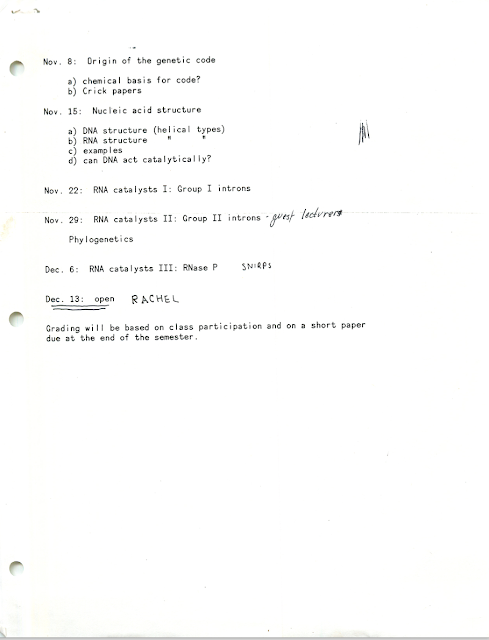 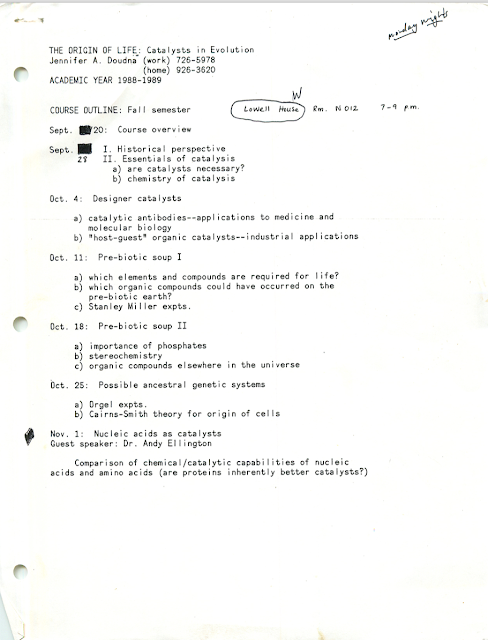 This course changed my life in multiple ways.

First, in the course I learned how to critically read scientific papers. A very important skill. And also I got introduced to the world of catalytic RNA and also the world of "Cairnsian Mutation" which became the topic of my grad. school applications, my NSF predoctoral fellowship application, and the first two years of my PhD work. And I also got introduced to the work of Norm Pace.

This led me to seek out ways to combine my interest in ecology and evolution with molecular biology, which in turn led me to joining the lab of Colleen Cavanaugh and starting work on culture independent DNA studies of microbes.

Anyway, I could go on and on. But this course was transformative. Over the years I had heard about the student who had taught the course and her work, but had not actually seen her in person until yesterday.

The course instructor was Jennifer Doudna. And yesterday I got to see her talk about her work on CRIPSR and CAS9 systems. She has already won a large number of prizes for her work on this, and likely more to come. I cannot say I am surprised. Though I had many teachers at Harvard who were famous, and some of whom were also great teachers and researchers, I can say without a doubt that the one who impressed me most was Doudna. Her passion for science, for biology, for teaching, for being critical while reading articles, and for just wild things that organisms do, was contagious. So cool to see what she is doing now.

Anyway - I made a Storify of the Tweets (mostly mine) from her talk. Check them out below:


UPDATE - found my term paper from the class . posting it here.
Removed Storify. Replaced with Wakelet
- September 02, 2015 No comments: