If only scientists were as important as Rupert Murdoch 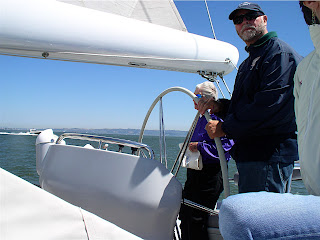 (CNN) -- A synthetic life scandal may have cost J. Craig Venter the nobel prize in medicine in 2011, but the maverick science mogul managed to end the year with a modest addition to his empire -- an account on Twitter.
Within 48 hours of debuting with tweets about family, work and his dogs, Venter had pulled in more than 5,000 followers and stirred internet debate over why the 60-year-old was now embracing a technology often used to attack him.
The tweets also raised doubts that the notorious technophobe was writing the messages himself. Science writer Carl Zimmer -- one of only eleven people being followed by Venter -- however insisted that the media mogul was writing "with his own voice, in his own way."
Venter appears to have made his Twitter debut some time ago but with the new year many are waiting anxiously for more posts with insight into his maverick lifestyle.

His past 27 tweets include posts about celebrations of the birthday of the first synthetic cell, Osama bin Laden, President Obama, and biofuels. These have raised suspicions that Venter's Twitter account was being used as a publicity tool to help improve his image after a damaging few years of people complaining he is trying to play God.
Trump is the Winklevoss of politics
Craig Venter via Twitter
"Could be brilliant Venter Institute PR operation," Venter colleague Jonathan Eisen tweeted after earlier commenting: "Might be somebody who knows Venter well, but it's not Craig (he doesn't use a computer unassisted nor get his own email)."
Others claimed that the voice of the tweets, as well as their faltering grammar and punctuation, were unmistakably Venter. "You can tell by the tweets he's doing it himself," wrote Hamilton Smith, Nobel Laureate and colleague of Venter's.
A spokesperson for the Venter Institute confirmed to CNN the account is genuine.
The account could offer new insight into a scientist whose life has been under intense scrutiny over the past few years after creating life, beating the public human genome project in the race for the genome, and using his boat as a decoy to study microbes that live in his body.
Twitter played a prominent role in many of the scandals around Venter when it was used to pressure funding agencies into limiting funding for Venter's Institutes. Commentators said the loss of this revenue was a key factor in Venter's decision to create life.
Venter's subsequent appearance before a US Congressional inquiry into synthetic biology also caused a sensation on Twitter, particularly after his wife, Heather Kowalski, threatened to use one of their motorcycles to run over anyone who threatened Venter at the hearing
There were echoes of Venter's congressional appearance -- which he called the "most humble day day of my life" -- in some of his tweets such as his comments about his visit to Syracuse University "Impressed with the student enthusiasm at Syracuse U."
But there were also signs that the science mogul was still getting to grips with social media. Reports suggested he was forced to quickly delete one post -- possibly after Kowalski leapt to his aid once again.
The Institute for Genome Sciences -- a fierce rival of Venter's -- was among genome centers claiming that Venter was guilty of "tweeting-before-thinking" for suggesting that Francis Collins was evil.
The message was apparently removed, but not before someone tweeting as Heather Kowalski implored: "Venter - DELETE TWEET." A further post on the unverified Kowalski account later added: "EVERY1: @jcventer was only having a joke pROMISE!!!" [sic].
Among other tweets by Venter, who also follows President Barack Obama, humorist Bill Maher, and MicrobeWorld, was an expression of support for President Obama's vision for the future.


With apologies (sort of) to CNN and their report on Rupert Murdoch's use of twitter. Brought to you by FSN - Fake Science News.