Bad words: Nebraska declares many words and names to be off limits when spelled/written

For immediate release
From the Nebraska State Government Headquarters

------------------------------------------
In response to criticisms of our handling of the sign language based signing of a child's name we have decided that it would only be rationale to also apply the same standard to written and spoken words.  Therefore, be it declared that any words or names that are one letter substitution away from anything bad should be banned.

For example, due to the danger associated with the word G-U-N (which we note - we are just spelling here but not actually writing the word) the following names have been banned: GUS, GUY and the following words are not allowed either GUM, GUY, BUN, RUN, SUN, FUN, GIN, PUN, GUT 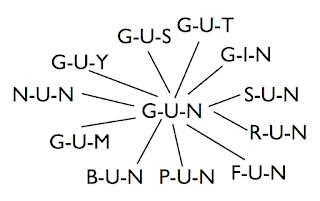 For similar reasons it has been deemed that the following names and words to be banned:

To help everyone out we have organized the names into clusters based on the banned word (which we would rather not spell out here).