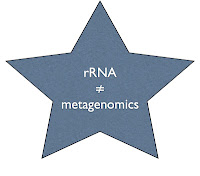 Aargh.  I am a big fan if of ribosomal RNA based surveys of microbial diversity.  Been doing them for 20+ years and still continue to - even though I have moved on to more genomic/metagenomic based studies.  But it drives me crazy to see rRNA surveys now being called "metagenomics".

Here are some examples of cases where rRNA surveys are referred to as metagenomics:

I found these examples in about five minutes of googling.  I am sure there are many many more.

Why does this drive me crazy?  Because rRNA surveys focus on a single gene.  They are not gnomicy in any way.  Thus it is misleading to refer to rRNA surveys as "metagenomics".  Why do people do this?  I think it is pretty simple.  Genomics and metagenomics are "hot" topics.  To call what one is doing "metagenomics" makes it sound special.  Well, just like adding an "omic" suffix does not make ones work genomics - falsely labeling work as some kind of "omics" also does not make it genomics.

Enough of this.  If you are doing rRNA surveys of microbial communities - great - I love them.  But do not refer to this work as metagenomics.  If you do, you are being misleading, either accidentally or on purpose.    So I think I need a new category of #badomics - "Omic Mimicry" or something like that ...

Well, this software might be useful for #metagenomics but drives me crazy when people refer to 16S PCR as #metagenomics plosone.org/article/info:d…
— Jonathan Eisen (@phylogenomics) August 22, 2012


@phylogenomics why such a strong sentiment? Do you have a good definition of the field of metagenomics that "excludes" the 16S work?
— Rob Hooft (@rwwh) August 22, 2012


@phylogenomics Yes, that would cut out all my favourite microbes.
— Sarah Watkinson (@philonotis) August 22, 2012


@rwwh metagenomics = sampling/analysis/study of the genomes from community/sample; rRNA PCR (which I love) is not about genomics
— Jonathan Eisen (@phylogenomics) August 22, 2012