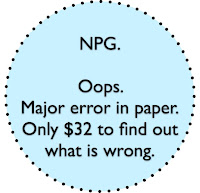 So - after finding out that "corrections" for freely available papers at Nature cost money to get access to I decided to snoop around at Nature Publishing Group's archives to see how they have handled corrections.

If you search for "Corrections" in Nature Publishing Group's journals, you see that many / most are labelled as "free" and in fact, they do seem to be free.  That is until about 5 years ago.  As far as I can tell, most "Corrections" published prior to September 2007 are not freely available.

For example see this correction where we are told

Tantalizing.  To find out more you need just pay $18.

Or in this correction:

Not so tantalizing.  But nevertheless the full correction can be yours for just $18.


The story ”That's no laser, it's a particle accelerator” (Nature 443, 256; 2006) incorrectly stated that the device described could accelerate electrons to 0.15% of their initial speed.

This is one of my favorites:


"A misleading statement appeared in the News and Views article “Cardiology: Solace for the broken-hearted?” by Christine L."

How about this one:

How about this one:

"On page 875 of this Article, there are some typographical errors in the equations used in the computer model. The errors are in the third and fourth full paragraphs on this page."

Some don't even have any clues.  For example in this one we just know the problem is in an article on Transatlantic robot-assisted telesurgery.  Or in this one the issue is with ancient homes for hard-up hermit crabs.


"The next two paragraphs will require slight modifications accordingly; and the last will, of course, be unnecessary. I owe this correction to a correspondence with which Prof. W.".  Alas, we can't know the rest without - wait for it - without paying $32.

I think we should have a context.  Find the correction for which the free part is the most absurd or tantalizing.  I don't know if other closed access journals do the same thing but it would be great to know ...

UPDATE: Some more fun stuff from Nature.  There is a paper from Nature in 2005 "Making sure corrections don't vanish online".  It is, of course, available for just $18.

Videos about using the UCSC Genome Browser for analysis of SarsCOV2

These look pretty useful and thought I would post here. Text is from the UCSC Youtube channel This 5-part video series is for virologists a...