Well, isn't this ironic.  There are a few news stories I was pointed to about a recent paper from Christine Greenhow & Benjamin Gleason at Michigan State.  Here is one of the stories: Why scholars don't trust social media? | Business Standard.  And here is a link to the paper: Social scholarship: Reconsidering scholarly practices in the age of social media.

In the news story linked above one of the authors of the study is reported to have said:


"Only a minority of university researchers are using free and widely available social media to get their results and published insights out and into the hands of the public, even though the mission of public universities is to create knowledge that makes a difference in people's lives," Greenhow explained.

And here are some quotes from another story: The "Ivory Tower" Appears Reluctant to Use Social Media:


I'm arguing that we need more “social scholars.” Social scholars use social media to publish and interact with scholarly output and to join an online community around their topic. Social scholarship is characterized by openness, conversation, collaboration, access, sharing and transparent revision... engaging an informal, social review process may help surface inaccuracies and engage a wider, nonspecialist audience.


“Academia is not serving as a model of social media use or preparing future faculty to do this,” Greenhow said. Adding, “The issue is at the heart of larger discussions regarding accessibility, equal rights to higher education, transparency and accountability.”

Obviously people who know me would know that I certainly feel that it would be good to have more scholars being active users of social media. Though I don't think I would push the discussion too far into "equal rights" at least in this context.

But though I support the general idea of some of the quotes from Greenhow, I can't say I agree with what is in the paper.  I can't say I disagree with it either.  You know why.  Because I do not have %&(#(&$ access to the paper.  This is what I get when I try to get the paper: 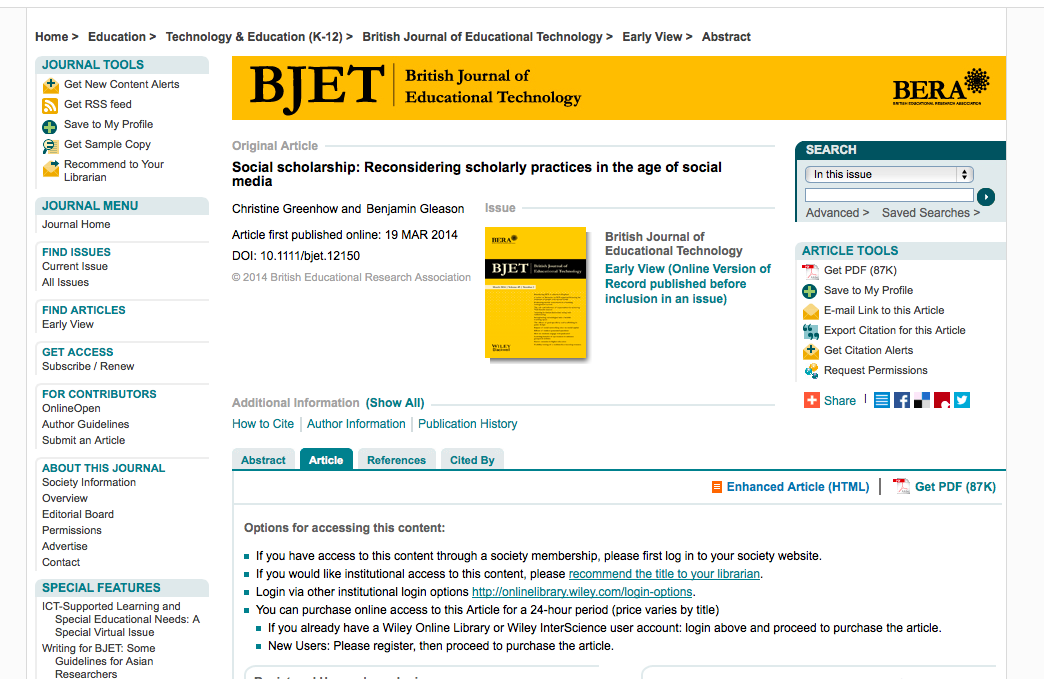 So let me get this straight.  There is a scholarly paper discussing the limited use of social / free / open media by scholars.  And one of the authors of the paper is lamenting this limited sharing of knowledge.  And the paper is not openly available.  Brilliant.