Not one woman: http://t.co/zU0uhELuvI. WTF

And something seemed hauntingly familiar about the organization referenced.  Turns out this is not the first time they have had issues with Gender Balance.  So I responded

And after seeing this new Tweet I dug around their web site some more and it is really unpleasant.  Look at their Advisory Panel (which is what Female Scientist was pointing to): 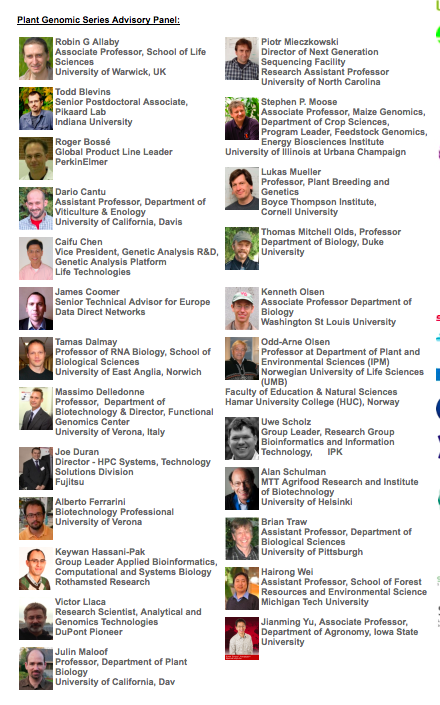 24 scientists.  All of them men.  If you know any of them, as I do, I would recommend you contact them and suggest they resign from this apparently gender-biased organization or force them to add some women to their advisory panel.

The speaker list for their next plant genomics meeting is quite skewed too.  I could find 49 men and 5 women.  What a joke.

I call upon everyone in the community to boycott this meeting and any organized by Global Engage in the future.  They have been informed previously of their gender ratio issues and are clearly not doing anything about it.  And in plant genomics there are so many excellent female scientists that this simply has to be a case of some type of bias.

In addition, I would recommend calling on the sponsors to withhold funding from this meeting and others organized by this group.