So - I gave a talk at a meeting on Thursday.  The meeting was called "Microbiomes of the Built Environment" and it was sponsored by the Alfred P. Sloan Foundation and run by AAAS.

The meeting organizers, as is often the case, wanted me to submit my slides a few days in advance, in theory to make sure they were loaded into their system and that all worked OK.  Well, as usual, I did not do this.  I like to make my talks fresh - just before the meeting so that I can incorporate new ideas into them and so that they do not have that canned feeling that a lot of talks do.

My talk was to be 15 minutes long and was to focus on my Sloan Foundation funded project "microBEnet: the microbiology of the built environment network" (see http://microbe.net for information about the project). I figured, I would work on the talk on the plane - five plus hours to edit a talk I had given relatively recently on the topic of this project.  And all would be good.  Plus, United had told me there would be WiFi on the plane so if I needed any new material I should be able to get it from the web right?  Well, the flight took off on time - 8 AM on Wednesday morning.  And I opened my laptop once allowed and paid the $15+ dollars for the WiFi and got to work.  Then, about 10 minutes later, the WiFi died and despite heroic efforts by the flight attendants, it never came back. And I plugged away at my slides doing some edits of the following presentation.

I had given this talk for the Annual Sloan Foundation meeting in May of 2013. I had other talks about microBE.net but they were focused on specific aspects and this was my most recent talk on the whole project. And, well, I started doing some minor edits on it, but, well, the slides felt too filled with boring text. And it did not seem to me to capture what I wanted to talk about. So I did the one thing that always helps me in such cases. I shut my computer and got our a notebook and started writing out and drawing out what I really wanted to talk about. And I finally started to have something I liked. 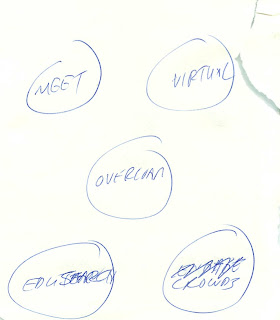 I liked this because what we are trying to do with microBEnet is to create an actual network and this was a visual way of representing our network. So then I got a bit more detailed 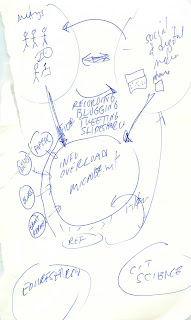 This was better. We were trying to help people in the field and help others who might be interested get connected, stay connected, and get rapid, easy access to information and tools. For example, we have been curating a reference collection for the field. And this reference collection has a lot of inputs and a lot of potential uses. In my previous talk I just listed some of this and had a screenshot of the web site. But it would be better to show this no? 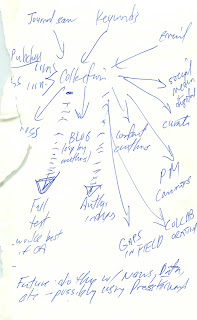 Now this was feeling even better. I had a visual framework for the talk. Now I could fill in the details of what I wanted to cover in each of the parts of the network diagram. 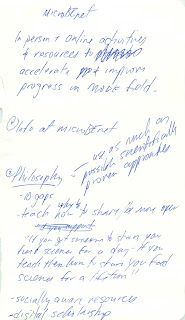 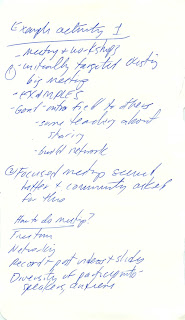 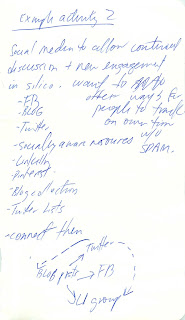 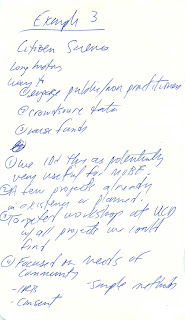 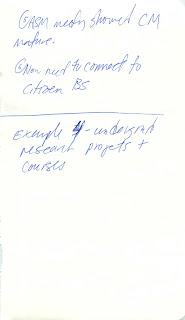 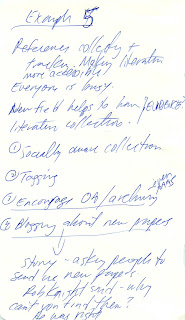 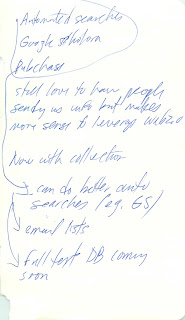 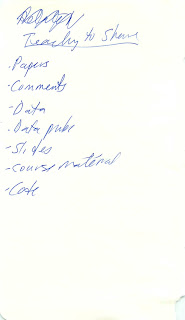 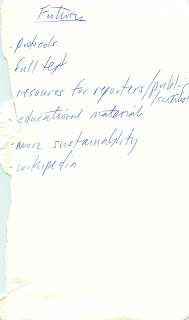 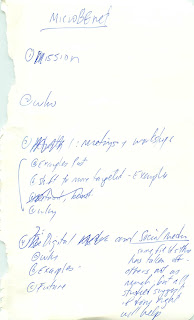 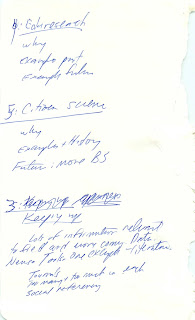 Now all I needed was a title .. 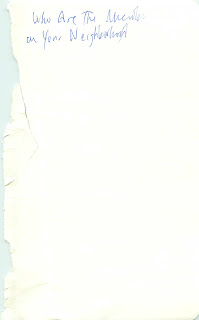 And then finally I felt I could go back to the computer. And so I started working on converting this all into slides.

For the remaining 2 hours of the flight I tried but it was slow going. I wanted to make as much as possible be visual and I needed all sorts of new slides and material from the web (no web connection still) and more. We landed. I took a Taxi to the hotel. I worked on my talk a bit from my room. I emailed various people asking for certain images and slides. And then I had to go to the speaker's dinner. And I got back to my room at about 9:30. And then I worked on my talk until about 3. And finally I was close to being done. Got a very brief few hours of sleep. Got up. Went to the meeting. Did a couple of minor modifications of my slides in the back of the room. Posted my slides to Slideshare. And then gave my talk.

Here are the final slides

microBEnet talk for #AAASMobe by @phylogenomics from Jonathan Eisen

Not perfect. But much more visual. Much more networky. Much better at showing what we actually do and try to do on my project.  And much fresher to me so it was certainly not a canned talk.  Not a polished talk .. but not a canned one.

For more about the meeting, including videos of talks (including mine) see the Storify I made.