Nothing gets me more riled up in evolutionary writings than the use of the term primitive to describe organisms on a "deep" branch in an evolutionary tree. Thus for the following tree 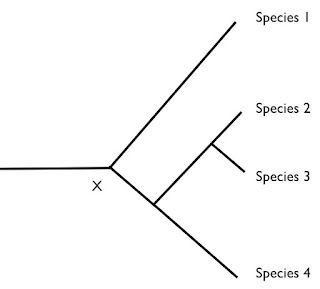 many people would refer to Species 1 as a primitive organism solely on the basis of this tree. In fact, I just saw this in the Hoxful Monsters blog (see here) where it says:

In April 2008, Cassey dunn et el published their famous phylogenomics work in Nature, which placed Ctenophores at the base of the tree making them most primitive animal on Earth. Before that work Sponges were considered as first animals to branch off from rest of the animals and hence occupied a most basal position in the tree of animals for long time. However, some months later another phylogenomics study carried out by Bernd Schierwater et al ; changed things dramatically by placing Trichoplax as most primitive animal replacing Ctenophores. Now a new phylogenomic study published in online section of Current Biology is making headlines , where Sponges regain their position as most primitive animal on Earth.

This is simply wrong as the term primitive, which I avoid at all costs because it is so frequently misused, should only be used to refer to features of organisms not to the branching pattern in an evolutionary tree. Forget for a minute that "primitive" implies that something else is "advanced", as if we could determine which is which. And lets pretend instead for a minute that "primitive" could be used in an equivalent manner as "ancestral." Ancestral is a term used to refer to features of organisms present, as the term implies, in an ancestor. Thus is the organism(s) at the node in the tree labelled with the X had some feature (e.g., lets say, they were green) and Species 4 is green while Species 1 is orange and Species 2 and 3 are purple. In this case, in terms of color, Species 4 has ancestral feature and the other species have derived features. And thus, when I am feeling generous, I will grant that one could sort of use the term primitive to say "Species 4 is primitive in terms of color." I don't like this usage, because primitive implies something about quality that ancestral and derived do not. But it is not so horribly wrong that I cringe.

But I would like to make two more points in terms of the way primitive is misused.
In other words, the fact that if you look only at species in the tree, that Species 1 is the deepest branching individual species, does not in any way tell whether Species 1 has primitive (i.e., ancestral) features. Features present in the common ancestor of the entire group (i.e., the organisms at node X) are the ancestral features. These features could change on any of the branches leading to Species 1,2,3, and 4. If they change, then the descendants will have derived features. If they stay the same they will have ancestral features. The branching order of the species does not explicitly tell us which one retains ancestral features.

This inaccurate use of phylogenetic trees to imply primitive features drives me batty. I was disappointed to see this phylogenetic gobbledygook being used in the HoxFul Monsters blog. And thus, Hoxful Monsters is the winner of my fourth "Twisted Tree of Life" award.
- April 12, 2009