YAMMGM: Yet another mostly male genomics meeting #2: Beyond the Genome 2013 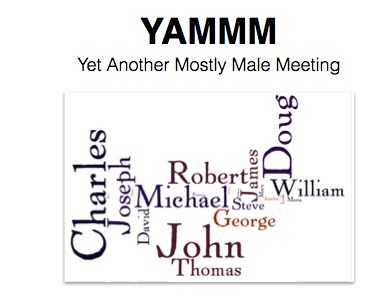 Well, the "winner" of this months YAMMGM award is Beyond the Genome 2013 | Mission Bay | San Francisco

Alas, YAMMGM stands for "Yet another mostly male genomics meeting" so it is not an award to covet.

This meetings listed speakers are below with women highlighted in green.
That comes to 16.6% if you count all listed.  If you exclude session chairs the numbers are a little different but still pretty low.

Certainly this does not prove any bias on the part of the meeting organizers.  But it certainly suggests to me they might want to think about why the ratio is skewed.
- May 10, 2013