ASM2013 - One of the best parts - meeting the "Young Ambassadors"

I attended the American Society for Microbiology (ASM) meeting in Denver last week.  It was a bit overwhelming as usual, with the 1000s of people there.  One surprise for me was an invitation to a after dinner party hosted by Nathan Wolfe and others from Metabiota.  I am not really a big fan of parties (as many who know me know) but this was small and even better it was mostly populated by the recipients of the ASM International Young Ambassador Award winners.  Wolfe was one of the keynote speakers at the ASM Meeting and I think he was hosting this party in part as a reception for the Young Ambassador's.

For more on the winners see


Anyway - it was very interesting to talk to many of them.  And I even got a picture with one of them - Yu Xia from Hong Kong (we were trying to form some sort of Tree of Life with our fingers). 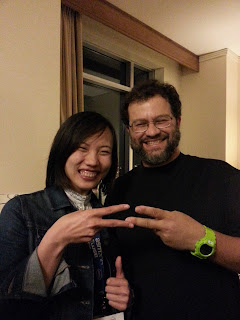 All societies have their good and bad parts.  Sponsoring Young Ambassadors from other countries is definitely one of the very good things ASM does.