Was going to blog about the distorted tree of life that BMC Biology used for an ad in the Scientist (note - I am a big fan of both BMC Biology and the Scientist, but the ad still irked me).  But I was not really sure where the image came from since the ad does not say much of anything about the source.  So I used a new trick I learned last week.  I scanned the ad: 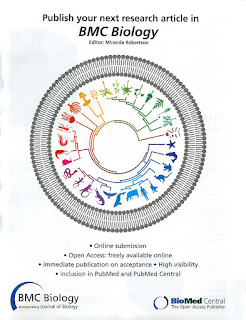 As all of you should be able to see, this tree does not do such a good job with microbial diversity.  And as an official Guardian of Microbial Diversity, I was offended.  So the question now was - from where exactly did this tree come?  And could I find BMC Biology saying something important about the figure so that then I could snark about them in my blog and give them a Twisted Tree of Life Award.

Last week in response to an email from some folks at ASM about tracking down the source of an image, I discovered a cool new trick which I used here.  I went to Google's image search page:

And instead of typing anything in, I clicked on the little camera icon inside the search box

And that gave me a new window: 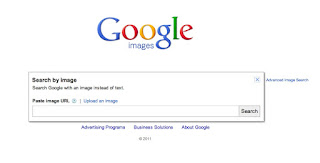 And I uploaded the scanded ad and presto, this window came up: 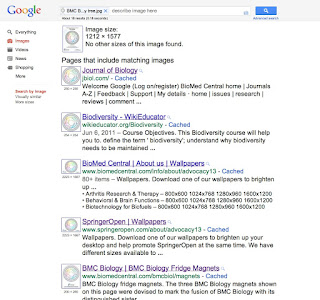 With all sorts of pages with similar images.  Pretty cool.  And after browsing a few of them I found that the page on BMC Biol. fridge magnets which they give away at conferences.  And for the one with the offending tree they say


The problem of representing all of biology is encapsulated in the image we have devised as an emblem for the fusion of BMC Biology and Journal of Biology. Our protocellular lipid bilayer surrounding a circular representation of a rootless phylogenetic tree omits explicit reference to much that is fundamental, critical and topical in biology, and outrageously distorts the phylogenetic tree. You will have to love the image for itself.

Well well well.  Kind of awkward to give someone an award for bad evolution mojo when they know full well that their evolution mojo is bad.  So alas, no Twisted Tree of Life Award for BMC Biology.  Kudos to them for knowing / acknowledging that the tree might have some issues.  Now what I really want is to get me one of them magnets.  Issues aside, the tree is pretty ...

UPDATE 9/3/2012
BMC Biology has an editorial about this here: What is wrong with this picture?