More on 'phylogenomics' - as in functional prediction w/ phylogeny

There is a new paper out: Phylogenetic-based propagation of functional annotations within the Gene Ontology consortium in Briefings in Bioinformatics.

The paper is interesting and presents a new general approach to using phylogeny for functional prediction of uncharacterized genes. I am interested in this for many reasons including that I was one of, if not the first to lay this out as a concept.  In a series of papers from 1995-1998 I outlined how phylogenetic analysis could be used to aid in functional prediction for all the genes that were starting to be sequenced in genome projects without any associated functional studies (at the time, I referred to all these ESTs and other sequences as an "onslaught" - little did I know what was to come).

My first paper on this topic was in 1995: Evolution of the SNF2 family of proteins: subfamilies with distinct sequences and functions.  The abstract is below:


The SNF2 family of proteins includes representatives from a variety of species with roles in cellular processes such as transcriptional regulation (e.g. MOT1, SNF2 and BRM), maintenance of chromosome stability during mitosis (e.g. lodestar) and various aspects of processing of DNA damage, including nucleotide excision repair (e.g. RAD16 and ERCC6), recombinational pathways (e.g. RAD54) and post-replication daughter strand gap repair (e.g. RAD5). This family also includes many proteins with no known function. To better characterize this family of proteins we have used molecular phylogenetic techniques to infer evolutionary relationships among the family members. We have divided the SNF2 family into multiple subfamilies, each of which represents what we propose to be a functionally and evolutionarily distinct group. We have then used the subfamily structure to predict the functions of some of the uncharacterized proteins in the SNF2 family. We discuss possible implications of this evolutionary analysis on the general properties and evolution of the SNF2 family. 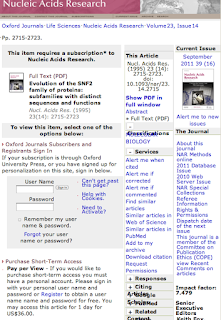 I note - I am annoyed that when I went to the Nucleic Acids Research site for my paper I discovered for some bizarre reason they are now trying to charge for access to it even though it is in Pubmed Central and used to be freely available on the NAR site.  WTF?  Is this just an IT issue like the #OpenGate complaints I made for a while about Nature Genome papers.

Anyway - in that paper in 1995 I basically showed that at least for this family, phylogenetic analysis could be used as a tool in making functional predictions by allowing one to better identify orthology relationships and subfamilies within the SNF2 superfamily.  This was novel I think maybe a little bit but others at the time were also looking into using various analyses to identify orthology relationships across genomes.

Shortly thereafter I started working on the concept that one could used the phylogenetic tree more explicitly in making functional predictions and eventually I laid out the concept of treating function as a character states and doing character state reconstruction using a gene tree to then infer functions for uncharacterized genes.  I called this approach "phylogenomics" in a paper in 1997 in Nature Medicine (the editor asked us to give it a name ... and thus my own contribution to the omics word game began).  Alas somehow the title of our paper became "Gatrogenomic delights" a movable feast" since we were writing about the E. coli and H. pylori genomes, so I added yet another omics term at the same time.  In the paper I showed how phylogenetic analysis of the MutS family of proteins could help in interpreting one of the findings in the H. pylori genome paper:

In this paper we showed why blast searches were not ideal for inferring relationships among sequences (because blast measures similarity NOT evolutionary history per se).  A bit annoyed still that other papers then sort of claimed they were the first to show blast was not ideal for inferring evolutionary relatedness, but whatever. This still did not fully describe the phylogeny driven approach that I was working on so I then wrote up an outline of this approach for a paper in Genome Research: Phylogenomics: Improving Functional Prediction for Uncharacterized Genes by Evolutionary Analysis.  This paper really laid out the idea in more detail:

It also gave detailed examples of how similarity searches could be misleading and how phylogenetic analysis should in principle be better. I note - I am very very proud of this paper.  But it did not do a lot of things.  Really it was about laying out a concept of using tools from phylogenetics in functional prediction.  But it did not provide software for example.  I later developed some of my own scripts for doing this when I was at TIGR but really the software for phylogeny driven functional predictions would come later from others like Kimmen Sjolander, Sean Eddy, and Steven Brenner.  Each method laid out in these tools and in other papers had its own flavors and I continued to explore various approaches and applications to phylogeny driven functional prediction.  Examples of my subsequent work are listed below (with links to the Mendeley pages for these papers):


Plus we (at TIGR) used phylogenetic analysis as a tool in annotation of many many genomes as well as metagenomes.

Anyway, enough of history for a bit.  What is interesting about this new paper is that they take a slightly different approach to phylogeny driven functional prediction in that they make use of Gene Ontology functional annotations as their key parameter to trace on evolutionary trees.  They lay out the differences in their method quite well in the introduction:


Our general approach is similar to the ‘phylogenomic’ method proposed by Eisen [6] and further developed into a probabilistic form by Engelhardt et al. [7], but with important differences. Eisen proposed a conceptual approach for predicting protein function using a phylogenetic tree together with available experimental knowledge of proteins. The original approach relied on manual curation to identify gene duplication events and to find and assimilate the literature for characterized members of the family. Engelhardt et al. used automated reconciliation with the species tree [8] to identify gene duplication events, and experimental GO terms (MF only) to capture the experimental literature. Using this information, they defined a probabilistic model of evolution of MF involving transitions between different molecular functions.


From these previous studies, we adopt the basic approach of function evolution through a phylogenetic tree and the use of GO annotations to represent function. However, unlike these other phylogenomic methods, we represent the evolution in terms of discrete gain and loss events. In Eisen's original model, an annotation does not necessarily represent a gain of function (it could have been inherited from an earlier ancestor), and losses are not explicitly annotated. The transition-based model of Engelhardt et al. assumes replacement of one function by another (gain of one function coupled to the loss of another), and does not capture uncoupled events, which is particularly important for BP annotations and cases where a protein has multiple molecular functions (see examples below). In addition, we make no a priori assumptions about conservation of function within versus between orthologous groups, or about the relationship between evolutionary distance and functional conservation (as the distance may not necessarily reflect every given function). While, as described below, gene duplication events and relatively long tree branches are important clues for curators to locate functional divergence (gain and/or loss), in our paradigm an ancestral function can be inherited by both descendants following a duplication (resulting in paralogs with the same function) or gained/lost by one descendant following a speciation event (resulting in orthologs with different functions). Evolution of each function is evaluated on a case-by-case basis, using many different sources of information about a given protein family

I note - Paul Thomas, one of the authors here has also been developing phylogeny driven functional prediction methods for many years and has done some cool things previously.  This new approach seems novel and useful and their paper is worth looking at.  I like too that they focus on MutS homologs for some of their examples:

Anyway - their paper is worth a read and some of their software tools may be of use including PAINT: http://sourceforge.net/projects/pantherdb/ and http://pantree.org

Good to see continuous developments in phylogeny driven functional predictions.  If you want to learn more - check out the Mendeley Group I have created:

Phylogenetics assisted functional prediction is a group in Biological Sciences on Mendeley.

And please contribute to it. Below are some previous posts of mine of possible interest: