Last year, Rebecca Skloot came to Davis to talk about her book "The Immortal Life of Henrietta Lacks".  Note - if you have not read the book - what f*$ing rock have you been hiding under?  It is in my opinion the best non fiction book I have ever read.  Seriously.  Not the best science book. The best non fiction book of any kind.  And I am not alone in this feeling as it has won a bazillion positive reviews and awards.   In summary - it tells three stories - the story of the isolation of HeLa cells, the story of the woman from whom those cells came, and the story of Skloot learning the other two stories.

Anyway - I somehow managed to get her to come to UC Davis to give a talk last year just as the book was going viral.  In preparation for Skloot's visit I decided to do some sort of "open access" schtick and looked into how many papers about HeLa cells were in Pubmed Central.  Pubmed Central is a database of papers for which the full text is available at no charge.  After this mini-research and after interacting with Rebecca over the last year and seeing the well deserved recognition of her book, I have been a bit fascinated about how much of the literature surrounding studies of HeLa cells is openly and/or freely available. 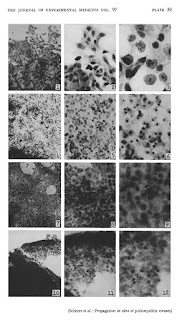 So today I decided to see what was the earliest HeLa paper that was freely available on PubMed Central.  And I managed to find a good one: Studies on the propagation in vitro of poliomyelitis viruses. IV. viral multiplication in a stable strain of human malignant epithelial cells (strain hela) derived from an epidermoid carcinoma of the cervix. William F. Scherer, Jerome T. Syverton, and George O. Gey.  J Exp Med. 1953 May 1; 97(5): 695–710.

I believe this was the first full paper published discussing HeLa cells.  Nice short title by the way. Anyway - good to see it in Pubmed Central.

I note  - I could not find in Pubmed Central the meeting abstract about HeLa cells which was published in 1952 but I did find it from Cancer Research's online archive here.  I have copied the abstract below, for you HeLa history buffs out there:

This is a report of an evaluation in vitro of the
growth potential of normal, early intra-epithelial,
and invasive carcinoma from a series of cases of
cervical carcinoma. Comparable cytological and
tissue culture studies were actually carried out on
selected biopsies of normal and neoplastic areas of
the same cervix. Thus far, only one strain of epi-
dermoid carcinoma has been established and
grown in continuous roller tube cultures for al-
most a year. It grows well in a composite medium
of chicken plasma, bovine embryo extract, and
human placenta! cord serum. The autologous nor-
mal prototype is most difficult to maintain under
comparable cultural conditions. Most of the tissue
from other cases showed rapid keratinization of
the cells grown in cultures whether from normal
or neoplastic areas. Some of the hormonal aspects
of the problem will be discussed.

Anyway - if you are interested in HeLa and/or The Immortal Life of Henrietta Lacks, you may find it interesting to check out these early papers on the topic such as the ones described above.  Here are a few more that are from the early era and are freely available:
Pubmed Central is a rich resource not just for accessing scientific papers but for learning about science history too.  It is a good thing that articles in Pubmed Central are available at no charge and here's hoping that sometime soon that past and present and future science papers will be more readily available to all.

UPDATE ----------
John Hogenesch from U. Penn made a nice figure of relevance and agreed to let me post it: 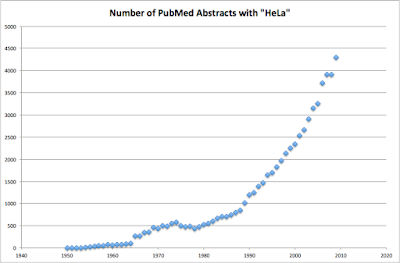 And he comments "You can see several things, Nixon's "war on cancer" in the early 70s and the dawn of the cell/molecular biology age in the 80s and expansion in the 90s."