And the bad new omics words keep streaming in. Today's winner of the "Worst New Omics Word Award" is going to Carey Lambert, Chien-Yi Chang, Michael J. Capeness and R. Elizabeth Sockett from Nottingham for their use/ invention of "Predatosome". They use this term in the title of their new PLoS One paper: The First Bite— Profiling the Predatosome in the Bacterial Pathogen Bdellovibrio. Here is the very long sentence where the define it:

The gene products required for the initial invasive predatory processes have not been extensively studied but the genome sequencing of B. bacteriovorus HD100 [1] revealed a genome of 3.85Mb, including a core genome similar to that of non-predatory bacteria and some 40% of the genome comprising a potential predicted “predatosome” of genes, encoding both hydrolytic products that may be employed in prey degradation, and genes that may be required specifically for host predation and thus are not conserved across the Proteobacteria. 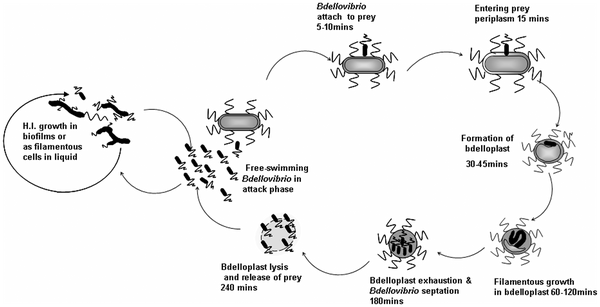 The paper is actually quite interesting. They use genomic approaches to characterize a fascinating organism - the bacterial species Bdellovibrio bacteriovorus. This bug is a predatory organism - eating other bacteria. Since it eats them from the inside out, some, including these authors, refer to this organism as a pathogen of other bacteria and their is some discussion here and elsewhere for its potential to serve as a "living antibiotic" in much the same way people are trying to use bacterial viruses (a.k.a. phage).

The paper overall is quite nice on first read. They used microarray studies to characterize gene expression patterns in different phases of the life cycle (see Figure above for the life cycle outline). They backed up this work by quantitative PCR studies and regular RT PCR. And based upon their analysis they found some genes that are "Up-Regulated in Predatory, but Not HI" phase (HI stands for host-independent). And here is where they really tell us what they mean by predatosome:

This category of 240 genes are very interesting as they potentially exclude those genes simply involved with release from attack-phase into growth, namely they should be part of the “predatosome” of predatorily specific genes.

It seems to me this terminology is completely unnecessary. All they need to do is say they are studying the genes related to the predatory phase. To assign these genes to the "predatosome" is a bit much. They continue in the paper to report some really interesting stuff. For example, they also examine another predatory bacterial species, and look at whether there are genes conserved in the process between species. They made some really nice figures by the way about the different phases of hte life cycle in this organism and which genes are expressed: 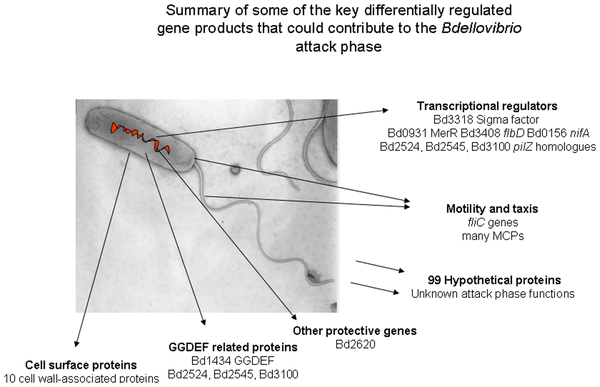 Anyway - the science in the paper is nice. However, the invention of yet another omics word is a bit much. And thus Lambert et al. are winners of the highly coveted "Worst New Omics Word Award" for their invention of "predatosome". Details on the paper are below - and that is where the figures come from too. (Hat tip to Bora for letting me know about the paper, and the word). 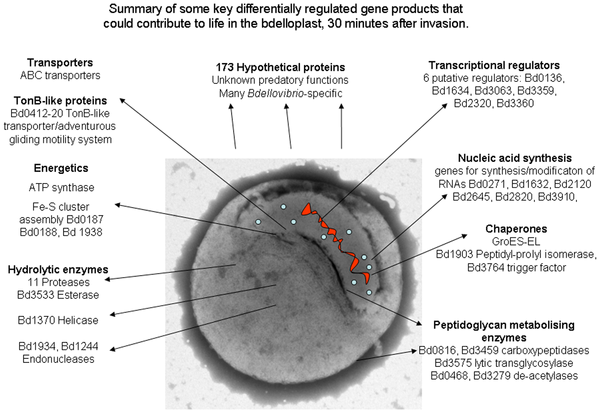