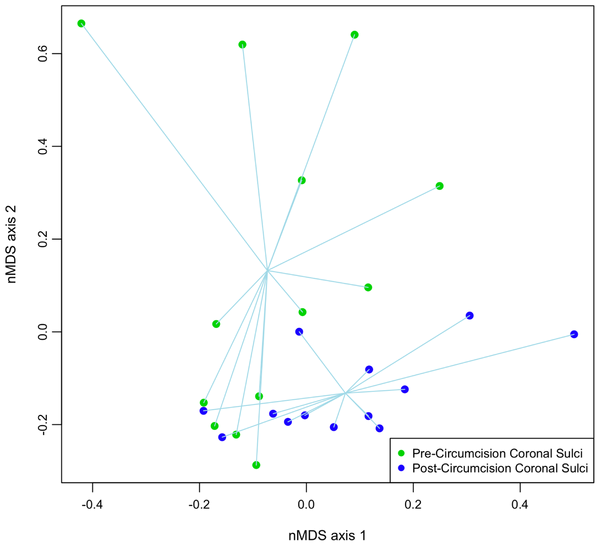 A new paper just showed up on PLoS One and it has some serious potential to be important The paper (PLoS ONE: The Effects of Circumcision on the Penis Microbiome) reports on analyses that show differences in the microbiota (which they call the microbiome - basically what bacterial species were present) in men before and after circumcision. And they found some significant differences. It is a nice study of a relatively poorly examined subject - the bacteria found on the penis w/ and w/o circumcision. This is a particularly important topic in light of other studies that have shown that circumcision may provide some protection against HIV infection.

In summary here is what they did - take samples from men before and after circumcision. Isolate DNA. Run PCR amplification reactions to amplify variable regions of rRNA genes from these samples. Then conduct 454 sequencing of these amplified products. And then analyze the sequences to look at the types and #s of different kinds of bacteria.

What they found is basically summarized in their last paragraph


"This study is the first molecular assessment of the bacterial diversity in the male genital mucosa. The observed decrease in anaerobic bacteria after circumcision may be related to the elimination of anoxic microenvironments under the foreskin. Detection of these anaerobic genera in other human infectious and inflammatory pathologies suggests that they may mediate genital mucosal inflammation or co-infections in the uncircumcised state. Hence, the decrease in these anaerobic bacteria after circumcision may complement the loss of the foreskin inner mucosa to reduce the number of activated Langerhans cells near the genital mucosal surface and possibly the risk of HIV acquisition in circumcised men."

And this all sounds interesting and the work seems solid. I note that some friends / colleagues of mine were involved in this including Jacques Ravel who used to be at TIGR and now is at U MD and Paul Kiem who is associated with TGen in Arizona. For anyone interested in HIV, the human microbiome, circumcision, etc, it is probably worth looking at.

However, the press release I just saw from TGen really ticked me off. The title alone did me in "Study suggests why circumcised men are less likely to become infected with HIV". Sure the study did suggest a possible explanation for why circumcised men are less likely to get HIV infections - the paper was justifiably VERY cautious about this inference. They basically state that there are some correlations worth following up.

The press release goes on to say "The study ... could lead to new non-surgical HIV preventative strategies for the estimated 70 percent of men worldwide (more than 2 billion) who, because of religious or cultural beliefs, or logistic or financial barriers, are not likely to become circumcised." Well sure, I guess you could say that. I think they are iplying you could change the microbiome somehow and therefore protect from HIV but that implies (1) that there really is a causal relationship between the microbial differences in HIV protection and (2) that one could change the microbiome easily, which is a big big stretch given how little we know right now.

Anyway - the science seems fine and not over-reaching. But the press release is annoying and misleading. Shocking I know. But this one got to me.