I just got an email about this meeting: CSH Asia 2016 Conference on Microbial Communities in the Environment: Emerging Technologies and New Frontiers:

So the first thing I did was to look at the gender ratio of speakers. I dug into each person listed here as much as a I could and attempted to infer what their gender is.  I realize this is fraught with problems and have written about this previously.  So as much as possible I looked for what pronouns were used to describe these people before infer their possible gender.  I was unable to get any clear gendered pronouns for one person but the others I think I got enough evidence to make a hypothesis.  I colored those I inferred to be male in yellow and those I inferred to be female in green.

Thus of the speakers (keynotes and invited) I infer a ratio of 18 men to 2 women (and one unknown).  So that is 10% women.  Not remotely representative of the gender in the general area of microbial communities.

I note - this whole thing saddens me even more because one of the invited female speakers is Alana Firl, who is a post doc at UC Davis jointly working in my lab and Sundar's lab.  She is completely awesome and brilliant.  But this meeting?  Well, it is a manel (a panel of mostly men).  A YAMMM (yet another mostly male meeting).  And a disappointment.

So I decided to see if maybe it was just this meeting in the CSHL Asia series and if others were all OK.  So I went to their list of past meetings and looked at just the keynote speakers.

And I went to their list of future meetings and looked at a few (in fields I knew a bit about)
Frontiers in Single Cell Genomics: three keynotes - all male
Telomere and Telomerase: one keynote - male
Synthetic Biology: one keynote - male
Chromatin, Epigenetics and Transcription: three keynotes -all male
DNA Metabolism, Genomic Stability and Diseases: two keynotes - one male and one female
Latest Advances in Plant Development & Environmental Response/AWAJI,JAPAN: two keynotes  - both male
Systems Biology of Gene Regulation and Genome Editing: no keynotes yet

So in these meetings it is 29:3 male to female for the keynote talks.  Less than 10% female. Great.  CSH Asia meetings.  Where men get to speak about all the stuff they know. 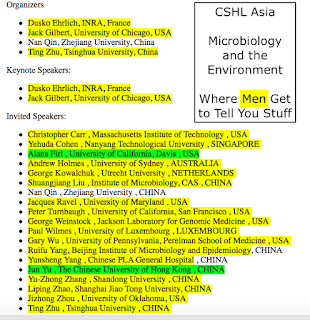