A tale of salt and gender: participation of women in halophile research

Interesting paper on women in science of direct relevance to my work: Frontiers | Salty sisters: The women of halophiles | Extreme Microbiology.  I have been working on halophilic archaea for many years (since introduced to them in graduate school) and published papers on this topic (e.g., see The Complete Genome Sequence of Haloferax volcanii DS2, a Model Archaeon and Sequencing of seven haloarchaeal genomes reveals patterns of genomic flux and more coming).  However, I have never been to a meeting dedicated to the topic and confess I have not thought specifically about the gender of scientists in this field and at meetings in the field and such.  Thus I was pleasantly surprised to see this analysis from Bonnie Baxter, Nina Gunde-Cimerman and Ahoren Oren.  Their abstract is below:


A history of halophile research reveals the commitment of scientists to uncovering the secrets of the limits of life, in particular life in high salt concentration and under extreme osmotic pressure. During the last 40 years, halophile scientists have indeed made important contributions to extremophile research, and prior international halophiles congresses have documented both the historical and the current work. During this period of salty discoveries, female scientists, in general, have grown in number worldwide. But those who worked in the field when there were small numbers of women sometimes saw their important contributions overshadowed by their male counterparts. Recent studies suggest that modern female scientists experience gender bias in matters such as conference invitations and even representation among full professors. In the field of halophilic microbiology, what is the impact of gender bias? How has the participation of women changed over time? What do women uniquely contribute to this field? What are factors that impact current female scientists to a greater degree? This essay emphasizes the “her story” (not “history”) of halophile discovery.

As part of their paper they analyze participation of women at conference on halophiles: 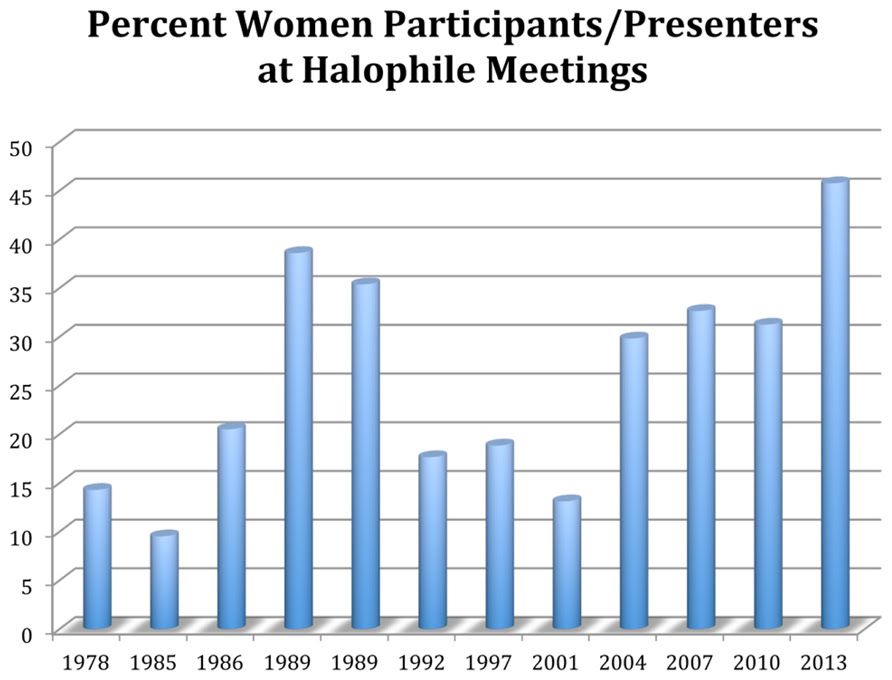 This is a useful analysis and compendium and it would be great to see this done for as many fields as possible.