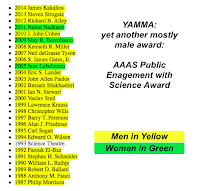 
And I went to check it out since, well, I wondered - how could I win that.  And so I thought - I should look at how I compare to previous winners.  And in one way I compare really well. I am male.

Below is a list of past winners (via AAAS). In yellow I highlight those that appear to be male and green those that appear to be female. I note I base my assignment on appearance and names and descriptions of the people including the descriptions from AAAS. I realize that determining someone's gender is not always straightforward and that there are people who do not fit into this binary gender division and I apologize for any mistakes made.
The totals are 24 men and 3 women (and one group).  Or, for those assigned to a gender, 89 % men and 11 % women.  Could this all be about merit?  I don't think so.  I think there are many examples of areas in which AAAS has problems with gender bias.  For example, consider the recent letter (of which I am a cosigner) regarding AAAS' reinforcement of "damaging stereotypes".

Email ThisBlogThis!Share to TwitterShare to FacebookShare to Pinterest
Labels: AAAS, YAMMA, yet another mostly male award