Nice timing: Our paper on the Darwin's Finch genome is out today on Darwin's birthday

Well, I assume this was on purpose from the folks at Biomed Central but not sure.  Our paper on the genome of one of Darwin's Finches is out today in BMC Genomics: BMC Genomics | Abstract | Insights into the evolution of Darwin's finches from comparative analysis of the Geospiza magnirostris genome sequence.

Abstract of the paper:

Background
A classical example of repeated speciation coupled with ecological diversification is the evolution of 14 closely related species of Darwin’s (Galápagos) finches (Thraupidae, Passeriformes). Their adaptive radiation in the Galápagos archipelago took place in the last 2–3 million years and some of the molecular mechanisms that led to their diversification are now being elucidated. Here we report evolutionary analyses of genome of the large ground finch, Geospiza magnirostris.
Results
13,291 protein-coding genes were predicted from a 991.0 Mb G. magnirostris genome assembly. We then defined gene orthology relationships and constructed whole genome alignments between the G. magnirostris and other vertebrate genomes. We estimate that 15% of genomic sequence is functionally constrained between G. magnirostris and zebra finch. Genic evolutionary rate comparisons indicate that similar selective pressures acted along the G. magnirostris and zebra finch lineages suggesting that historical effective population size values have been similar in both lineages. 21 otherwise highly conserved genes were identified that each show evidence for positive selection on amino acid changes in the Darwin's finch lineage. Two of these genes (Igf2r and Pou1f1) have been implicated in beak morphology changes in Darwin’s finches. Five of 47 genes showing evidence of positive selection in early passerine evolution have cilia related functions, and may be examples of adaptively evolving reproductive proteins.
Conclusions
These results provide insights into past evolutionary processes that have shaped G. magnirostris genes and its genome, and provide the necessary foundation upon which to build population genomics resources that will shed light on more contemporaneous adaptive and non-adaptive processes that have contributed to the evolution of the Darwin’s finches.


There is a long long long story behind this paper.  Too long for me to write up right now.  I wrote up some of the story for a Figshare posting of the genome data last year.


“Darwin’s Finches” are a model system for the study of various aspects of evolution and development.  In 2008 we commenced on a project to sequence the genomes of some of these species – inspired by the (then) upcoming celebration of the 200th anniversary of the birth of Charles Darwin (which was in February 2009).  The project started with a brief discussion at the AGBT meeting in 2008 and then via an email conversation between Jonathan Eisen and Jason Affourtit about the possibility of a collaboration involving the 454 company (which was looking for projects to highlight the power of it’s then relatively new 454 sequencing machines).  After further discussions between Jonathan Eisen, his brother Michael Eisen (who separately had become interested in Darwin’s finches) and people from 454 it was decided that this was a potentially good project for a scientific and marketing collaboration.

In these conversations it was determined that the most likely limiting factor would be access to DNA from the finches.  This was largely an issue due to the fact that the Galapagos Islands (where the finches reside) are a National Park in Ecuador and also a World Heritage site.  Collection of samples there for any type of research is highly regulated.  Thus, Jonathan Eisen made contact with Peter and Rosemary Grant – the most prominent researchers working on the finches – and who Eisen had discussed sequencing the finch genomes in the early 2000s.  In that previous conversation it was determined that the sequencing would be too expensive to carry out without a major fundraising effort.  However, with the advent of “next generation” sequencing methods such as 454 the total costs of such a project would be much lower.

In the conversations with the Grants, the Grants offered to ask around to see if anyone had sufficient amounts of DNA (or access to samples), which would be needed for genome library construction.  Subsequently they identified Arkhat Abzhanov from Harvard as someone who likely had samples as well as permission to do DNA-based work on them, from many of the finch species. Abzhanov offered to provide samples from three key species (large ground finch Geospiza magnirostris, large cactus finch G. conirostris and sharp-billed finch G. difficilis) and DNA was sent to Roche-454 for sequencing in July of 2008.  In August, the first “test” sequence data was provided from Geospiza magnirostris.  A plan was then made to generate additional data and Roche offered to do the sequencing at their center at a steep discount.  Funds were raised by Jonathan Eisen, Greg Wray, Monica Riley, and others to pay for the sequencing and over the next year or so, three sequencing bursts were conducted at Roche-454. "

That is a decent summary of the background.  The details on the science are in the paper.  What the background does not say is that the project languished for years as we did not have funds to support the actual analysis of the genomes and it was kind of out of my normal area of expertise.  Along the way, I did a poor job of communicating with some of the initial parties in the project (e.g., I did a really bad job of communicating with Greg Wray - who had provide some of the funds - and I will forever be trying to make things up to him).  Anyway, thankfully Arhat eventually pulled together a group of people led by Chris Ponting to help analyze the genome and Chris led the way to the paper that is out today.  Only four years after our original goal.

I have been a birder and an evolutionary biologist for many many many years. Thus this is kind of a cool project for me.  When I was in the Galapagos in 2002 I dreamed of doing a project like this - and even started doodling Darwin's finches all over the place - including on some of the styrofoam cups we sent down to the bottom of the ocean on the outside of the Alvin sub as part of a deep sea research cruise I went on.  See below: 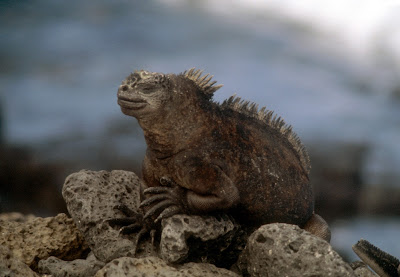