Was browsing through this paper (largely due to my interest in sequencing genomes of novel organisms): Genome Biology | Abstract | Genome of Acanthamoeba castellanii highlights extensive lateral gene transfer and early evolution of tyrosine kinase signaling.

And I found they found something very interesting.  "We identified two rhodopsins both with C-terminal histidine kinase and response regulator domains with homology to the sensory rhodopsins of the green algae that represent candidates for light sensors in Ac (Figure 3)." Seems they found some homologs of the proteorhodopsin / halorhodopsin family of proteins which I have been interested in for years.  Check out Figure 3: 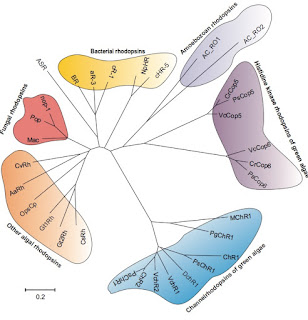 Every couple of months there is a new group of organisms that is found to have a member of this gene family.  See for example: Sequencing of Seven Haloarchaeal Genomes Reveals Patterns of Genomic Flux and Genome sequence of the Antarctic rhodopsins-containing flavobacterium Gillisia limnaea for papers in which I was involved where Rhodopsins were part of the story.  Also see the Venter et al. Sargasso paper: PDF.  Anyway - just a quick post for those out there interested in rhodopsins and the like ...