What is in a name? A case study of genomic epidemiology w/ Bacillus cereus and Bacillus anthracis

I was alerted to the paper by Eileen Choffnes of the National Academy of Sciences Institute of Medicine Forum on Microbial Threats (which I am a member of).  In the paper, James Musser, Angela Wright and colleagues, the authors discuss the use of genome sequencing in the characterization of a fatal infection with a bacterium that appeared to be a species of Bacillus.  Their summary is below and pretty much sums it up:

Objectives.—To describe and investigate a case of rapidly progressive, fatal, anthrax-like pneumonia and the overwhelming infection caused by a Bacillus species of uncertain provenance in a patient residing in rural Texas.

Design.—We characterized the genome of the causative strain within days of its recovery from antemortem cul- tures using next-generation sequencing and performed immunohistochemistry on tissues obtained at autopsy with antibodies directed against virulence proteins of B. anthracis and B. cereus.

Results.—We discovered that the infection was caused by a previously unknown strain of B. cereus that was closely related to, but genetically distinct from, B. anthracis. The strain contains a plasmid similar to pXO1, a genetic element encoding anthrax toxin and other known virulence factors. Immunohistochemistry demonstrated that several homologs of B. anthracis virulence proteins were made in infected tissues, likely contributing to the patient’s death.

Conclusions.—Rapid genome sequence analysis permit- ted us to genetically define this strain, rule out the like- lihood of bioterrorism, and contribute effectively to the institutional response to this event. Our experience strongly reinforced the critical value of deploying a well- integrated, anatomic, clinical, and genomic strategy to respond rapidly to a potential emerging, infectious threat to public health.

The part in which I am interested, not surprisingly, is the genomic-evolution part.  This is of interest since Bacillus anthracis is in a way a subspecies of a larger clade of bacterial types that includes Bacillus cereus and Bacillus thuringensis.  These two generally do not cause fatal disease in humans, though I believe there are prior cases (see for example, Anthrax, but not Bacillus anthracis?).  Also, I note, B. thuringensis is also known as Bt and is used extensively in agriculture to kill pests.  Anyway, though Bt abd Bc are known to occasionally cause humans trouble, without a doubt, if you say you have found a case of Bacillus anthracis in people, some serious freaking out will occur at some level.  People will want to know things - like is this a natural occurrence or a purposeful attack?  And in the end, there is a lot associated with the name since of course "anthrax" scares people.

So the authors here basically sequenced the genome of this isolate and then did some detailed phylogenomic analysis to place it in the Bacillus cereus/thuringensis/anthracis group.  See below: 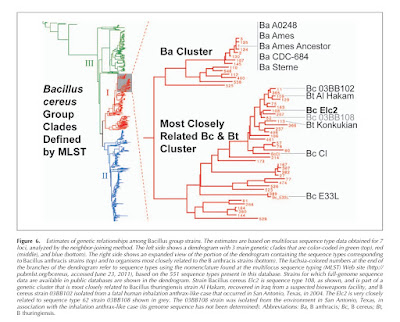 And it turns out, this strain is not in the anthrax portion of the tree.  It is in the Bacillus cereus part.  The key thing here is that this strain is clearly, phylogenetically, in the Bacillus cereus/thuringensis part of this clade.  Not so sure if the genomics was necessary here.  I think some detailed MLST and/or phylogenetics of other variable markers might have done the same trick.  But still, the resolution one gets from the phylogenomics is pretty good.  This is of course nothing really new.  There have been some nice genomic epidemiological studies done in the last year or two such as in the German E. coli and in some other cases (see for example, Prospective Genomic Characterization of the German Enterohemorrhagic Escherichia coli O104:H4 Outbreak by Rapid Next Generation Sequencing Technology and Origins of the E. coli Strain Causing an Outbreak of Hemolytic-Uremic Syndrome in Germany and The 2011 Shiga toxin-producing Escherichia coli O104:H4 German outbreak: a lesson in genomic plasticity and Open-Source Genomic Analysis of Shiga-Toxin-Producing E. coli O104:H4 and Pathogens: Genes and Genomes).

Though this is not per se new, this paper focuses a bit more on the pathology part of the story and even ends by linking to a new paper from one of the authors on how this type of work changes how we should conceive of pathology training:

One of us recently proposed the inception of a third, training track in pathology termed genomic pathology, designed to complement the traditional anatomic and clinical pathology tracks. As the introgression of genome- scale analyses proceeds rapidly and inexorably into con- temporary patient care and pathology practice, the career opportunities for this new type of trainee will increase considerably, and new patient-care niches will be created. We believe cases such as this highlight the need for, and potential utility of, a cadre of pathologists trained and facile in genomic pathology.

The paper on Genomic Pathology (thank goodness they did not invent a new omics word) can be found here.  There is no doubt we are in a new era.  Genomic sequencing is certainly going to be used in more and more cases like this and we definitely need to change the training paradigm if we want more people to use and understand it.