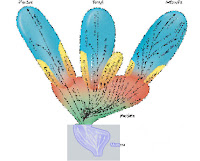 Well, I really don't want to complain so much but I guess I am on a roll recently.  And an email from Will Trimble pointed me to a news story that I cannot resist dissing a little bit.  The story is from National Geographic (86 Percent of Earth's Species Still Unknown?) and discusses the recent paper on number of species on Earth that I critiqued a bit in my last blog post: Bacteria & archaea don't get no respect from interesting but flawed #PLoSBio paper on # of species on the planet

The National Geographic article alas does not discuss the problems with the paper in terms of microbes (though Carl Zimmer's NY Times article How Many Species on Earth? It’s Tricky does as does a Google Plus post from Ed Yong. But that is not what I am here to moan about.  I am here to give out an award - a Twisted Tree of Life Award.  You see, I give this out when people who should generally know better do something bad relating to evolution.  And National Geographic (or, well, Traci Watson, the author) did in this article.  The complaint I have is the emphasis on the Five Kingdoms.  She writes.


Scientists lump similar species together into a broader grouping called a genus, similar genera into a still broader category called a family, and so on, all the way up to a supercategory called a kingdom..... There are five kingdoms: animals, plants, fungi, chromists—including one-celled plants such as diatoms—and protozoa, or one-celled organisms.

Perhaps even weirder though, the five kingdoms they list in the National Geographic article are not the same five kingdoms from Whittaker in 1969 which is the traditional source of the five kingdom system.  Whittaker had Monera (i.e., organisms without nuclei aka prokaryotes), Protists (single celled eukaryotes not in the other groups), Plants, Fungi and Animals.

Not quite sure where they came up with the five listed in the National Geographic article.  Most likely from Cavalier-Smith who has been pushing the Chromists.


But not sure what happened to the Monera.  Or, another way of putting this is that they appear to think that bacteria and archaea are not organisms.

So - for leaving out bacteria and archaea entirely and for pushing the 5/6 kingdom system that seems, well, out of date, I am giving National Geographic and Traci Watson my coveted Twisted Tree of Life Award.