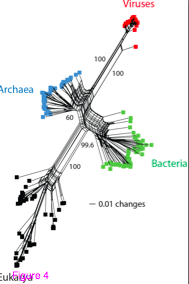 BMC Evolutionary Biology | Abstract | Giant viruses coexisted with the cellular ancestors and represent a distinct supergroup along with superkingdoms Archaea, Bacteria and Eukarya

Don't have time for a detailed blog post but here are some quick comments:

1. Giant viruses are fascinating and cool

2. I have done work connected to the topic of this paper and thus might not be considered fully objective.  For example see


3. I see no evidence that the type of analysis that they do on protein folds is a robust phylogenetic method.  Phylogeny from sequence alignments (which is what we focus on in my lab) have been tested and tweaked for some 50 years.  There are 100s to maybe 1000s of papers on methods alone - not to mention the 1000s of papers using alignments for phylogenetics.  I am not convinced that the analysis being done here of FFs and FSFs is particularly robust.  It seems interesting, certainly.  But is it sound?  I mean, I could build phylogenetic trees from cell size, from shape, from eye color, and from all sorts of other features.  Those would all suck for certain.  Protein folds - not sure about them.  They almost certainly are prone to convergent evolution and I do not see any attempt in this analysis to deal with that issue.

4. The authors of the current paper do not show any taxa names on their trees - just colors for large groups of taxa (bacteria, archaea, eukaryotes and viruses).  It is really not good practice to remove the taxon names.  If they were there the first thing I would do is to look at the patterns within the groups they highlight.  Do all the major phyla / kingdoms of eukaryotes, for example, come out looking as one would expect based upon other studies.  Or are they all over the place?  Same for bacteria and archaea.  Not including taxa makes it nearly impossible to judge this paper positively.  I could not find this information in supplemental data either.

5. They really should have released the data tables they used for the phylogenetic analysis.  Don't know why they did not.

6. In Figure 3 with the rooting they have, either viruses are a subgroup of archaea or archaea are not monophyletic.  Not a good thing in a paper trying to claim viruses represent a fourth grouping on the tree of life.

Anyway - got to do some other things but just wanted to get some comments out there.

UPDATE 9/19 - some prior stories about the "fourth domain" and ancient viruses - to counter notion in the press release for this paper that their findings "shake up the tree of life".  Even if their specific inferences about viral evolution are correct, such inferences / conclusions have been made before.