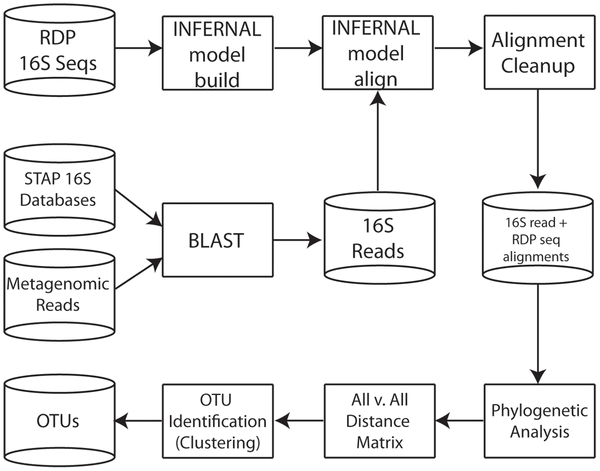 I am a coauthor on a new paper in PLoS Computational Biology I thought I would promote here.  The full citation for the paper is:

PhylOTU: A High-Throughput Procedure Quantifies Microbial Community Diversity and Resolves Novel Taxa from Metagenomic Data (doi:10.1371/journal.pcbi.1001061).
The paper discusses a new software program "phylOTU" which is for phylogenetic-based identification of "operational taxonomic units", which are also known as OTUs.   What are OTUs?  They are basically clusters of closely related sequences that are used to represent something akin to a species.  OTUs are used a lot in environmental microbiology b/c one key way to study microbes in the environment is through extraction and sequencing of DNA.  Traditionally this has been done through PCR amplification and sequencing of one particular gene (ss-rRNA).  Now it is also being done through random sequencing of all DNA from environmental samples (so called metagenomics).

Anyway - the paper is (of course) fully open access and you can read it for more detail.  Just thought I would post a little here about it.  The paper / project was led by Tom Sharpton, a post doc in Katie Pollard's lab at UCSF working on a collaborative project between Katie's lab, my lab, and Jessica Green's lab at U. Oregon (and recently Martin Wu's new lab at U. Virginia - he was in my lab previously).  This collaborative project even has a name "iSEEM" which stands for integrating statistical, evolutionary and ecological approaches to metagenomics.  This project has been generously supported by the Gordon and Betty Moore Foundation (via a grant for which I am PI).

Some little tidbits of possible interest about the project

This is long long overdue.  I have been wanting to write this post for a while now and just have not gotten to it. It has become abu...