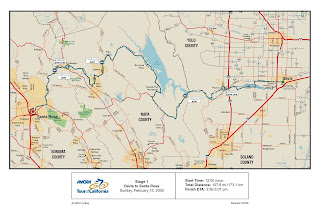 Very excited that the Tour of California is starting in Davis this year (for Stage 1 on Sunday). It should be a good stage --- from Davis to Santa Rosa.

And there are many many big names in the tour this year - even more than last year. In particular of course is Lance Armstrong. I have been a big fan of Lance for many many years -- since I encountered him in Palo Alto when I was a grad. student. He had just won the World Championship and was in town to sing autographs and hang out at Wheelsmith, the best bike shop in the area. I was just getting into cycling and was going to Wheelsmith for some other reason and there was Lance. I got him to sign a few things and then thought, what would be coolest would be if he signed my favorite T-shirt (which I am wearing in the picture here). And he made my day by saying "Cool shirt" and asking where I got it. 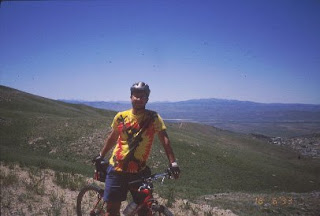 Anyway --- it is going to be a big big day in Davis tomorrow with Lance Armstrong, and a whole gaggle of big time cyclists here in the best biking town in the country.

And here are some links related to the race ...

Email ThisBlogThis!Share to TwitterShare to FacebookShare to Pinterest
Labels: cycling

Slideshow of Otters at the UC Davis Riparian Preserve

Made a slideshow of the otters I saw at the UC Davis Riparian Preserve yesterday. See