It was now six years ago that I wrote here wondering if it would be a good idea to have a conference where all the speakers were women.

See The Tree of Life: A conference where the speakers are all women?

I wrote about this because of the general issue with excessive numbers of conferences where most or all of the speakers were men.  I had come up with a term for such meetings - YAMMM.  Yet Another Mostly Male Meeting.  I even made some little pics / images to represent such YAMMMs. 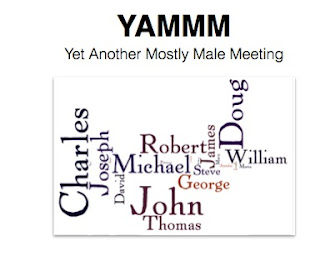 And I blogged and Tweeted about such meetings a lot (and still do).  See STEM Diversity posts and related links here for example.

When I wrote the post I was wondering if this would be a good counter to the problem of these YAMMMs (also called manels by others).  The feedback (much of it on Twitter) was really useful, mostly.  And over the years I pondered doing such a thing but to be honest, never felt really comfortable with the idea.  I worried about some of the possible negative sides of doing this, such as how the speakers might get unwanted attention and critiqued for being selected solely because of their gender.  And I also worried about whether this would be viewed in some way as a form of "reverse discrimination".

But I did try to do other analogous things where one reversed the normal gender skew (which is almost always towards males).  For example, when I found out, kind of at the last minute, I was speaking at a meeting with a very very skewed gender ratio of speakers, I gave my talk, but changed only referenced the work of women in the field.  See What to do when you realize the meeting you are speaking at is a YAMMM (yet another mostly male meeting)?  And in a class I teach I decided to basically replace most of the white male scientists I had been referencing with women and people of color.  Small things I know.  But I was pleased when people noticed these efforts and commented on how it made them think a bit about the examples we use when we give talks and teach.

Mind you, I have organized or helped organize a lot of meetings and seminar series since that post six years ago.  And I have tried to have the speakers at these be representative of diverse backgrounds in terms of gender, ethnicity, career stage, type of institution, and more.  But I myself have never gone to the next level and flipped the standard gender bias on its head.

Thus I was intrigued in September last year when I found out that my friend and colleague Dr. Rob Knight was co-organizing (with Dr. Sandrine Miller-Montgomery) a meeting in San Diego on "microbiomes" (my main area of research) where all of the invited speakers were women.  I blogged briefly about this here: 1st annual CMI International Microbiome Meeting (CIMM) w/ a great #STEMDiversity statement & plan.  I include below the material from the conference site that I included in that post:

On behalf of Dr. Rob Knight, the Center for Microbiome Innovation is pleased to host the 1st annual CMI International Microbiome Meeting (CIMM) on February 27–28, 2019 in San Diego. Additionally, we are pleased to announce that the 1st Urobiome Meeting on February 26, 2019, led by Linda Brubaker MD, will occur in conjunction with CIMM to make the most of your visit to San Diego.

During the first day of this event, leading researchers will present on the emerging science of the Urobiome and its recently discovered implications for human health, including common conditions such as urinary tract infection, urinary incontinence and bladder overactivity.

The following two days will feature high-impact presentations on the latest discoveries in microbiome sciences, with sessions on topics ranging from the microbiome in human disease and wellness and the metabolome, to primate microbiomes, to environmental and ocean microbiomes. For this first edition, we have decided to demonstrate that it is possible to have a large representation of women presenters in a scientific meeting by inviting only women speakers. Be prepared to hear from fantastic presenters such as Dr. Katie Amato (Northwestern University), Dr. Rita Colwell (University of Maryland), Dr. Merete Eggesbo (Norwegian Institute of Public Health), Dr Susan Prescott (University of Western Australia), Dr. Lita Proctor (NIH), and many more!

In addition, I agreed to serve on a panel at the end of the meeting discussing "Breaking the Glass Ceiling: How do we solve the gender imbalance in STEM?" (I had found out about their plans for the meetings when they invited me to serve on the panel). As someone who has critiqued meetings for egregiously skewed gender ratios of speakers and as someone who has called attention to in particular the many microbiome focused meetings with gender balance issues, the whole idea behind this conference was in essence represented by this statement:


For this first edition, we have decided to demonstrate that it is possible to have a large representation of women presenters in a scientific meeting by inviting only women speakers

This was certainly a bold move by the organizers. So - now zoom to today.

Today I am heading down to San Diego for the meeting.  And yesterday I found out that there was an editorial in the Wall Street Journal apparently critiquing the plan for having only female speakers.  It is entitled "No Men Allowed" by James Freeman. Alas, I do not have access to the editorial as it is behind a paywall.  There is also an editorial by Mark Perry at the American Enterprise Institute web site: Can the University of California bar males from presenting research at a biology conference?

So -- clearly, some people do not like the idea of a conference where all the speakers are women.  I confess I am still torn about the whole concept for the reasons I mentioned above.  However, even though I am torn, I do think it is important to push back against the clear implicit and explicit biases that have occurred against women in relation to speaking at conferences.  There is an extensive literature on this topic and on the topic of implicit and explicit biases that may be involved.  And I think this conference is an important form of push back.  The organizers may in fact get a bunch of grief over not having any male speakers.  But they will also provide an important venue for people to get challenged.  Conferences with only male speakers occurred for many many years without too many people raising any complaints.  And now some still occur but they are generally frowned upon in most places and are becoming rarer at least in my fields.  So in a way this conference can serve a similar function as Ruth Bader Ginsburg's dream of an all female US Supreme Court (this analogy was pointed out to me by Karen James). In reference to this concept Ruth Bader Ginsburg said:


"So now the perception is, yes, women are here to stay. And when I'm sometimes asked when will there be enough [women on the supreme court]? And I say when there are nine, people are shocked. But there'd been nine men, and nobody's ever raised a question about that."

Of course, gender bias is just one of the forms of bias that happens in STEM fields and with STEM conferences.  It is not the only issue we need to worry about or work on.  But it is a big one.  And the organizers of this meeting have done something bold and risky to confront this issue.

I will report more from the meeting. I would also love to hear what other people think about the plan for this conference.


PS. Thanks to multiple colleagues for some private feedback on this conference.  If I get permission I will post details of their comments.