No Microbiome Santa Claus we cannot magically convert correlative studies into causal ones. And scientists dishing out medical advice about vaping based on such bad science is ridiculous.

Aaarrrrrrrg.  That is how I feel right now.

Many microbiome studies involve examining the microbiome in various samples and asking and answering "Are there differences in the microbiome between my sample types?".  This is a standard correlative analysis used in all sorts of areas of science. and it can be quite useful in many cases.

However, in most cases it is not OK to take information from a correlative study and infer that the microbiome was "changed" due to some factor that differed between the samples.  Generally this would only be possible to do in some sort of controlled experimental manipulation experiment.  But so so so many people make such inferences and I am going to highlight an example that relates to a new study of vaping and the microbiome.

There is a new paper on this topic and an associated press release:
Basically the researchers compared microbiomes in three groups of people who had different behaviors (some non smokers, some smokers, some papers vapers).  Note - they did not study people before and after vaping or smoking.  They compared different people who differed in these behaviors but also differ in 100s to 1000s of other things like diet, gender, age, activity, housing, childhood, and more.

And when they did comparisons in relation to the main variables of non smoker, smoker, vaper, they found some differences in microbiomes and some similarities.  Small study.  But potentially interesting.

However, the PR significantly misrepresents what they did and found. Here are some examples of wording I have a problem with:

This is one of the more problematic press releases I have seen in a while.  Really disappointing.  However, much more surprising is that many of these word choice and inference issues are also in the paper.  Here are some examples of problems with the wording in the paper (not all cases - just examples).
So - you might ask -- why does this matter?  This is just a little bit of a word choice issue right?  Wrong. The press release and the paper mislead as to what was found here.

You might then say "so what - what does it matter?".  Well, it does matter because when you make these types of misleading statements they might get picked up by the press or the public.  Like in the examples below:

Daily Mail: An incentive to switch to e-cigarettes? Smokers have more 'bad' and less 'good' bacteria than vapers putting them at greater risk of disease, finds study 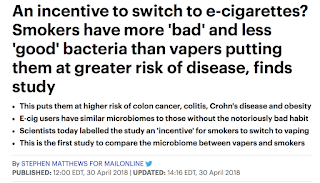 Let's check out those bullet points:

Wow.  This study provides incentive for people to switch from smoking to vaping.  Sorry - but the F@#$*)@#) it does.  Ridiculous.

And it shows that this puts people who smoke at higher risk of colon cancer, colitis, Crohn's and obesity.  The #(!@)($!@)( it does.

Just wait.  I am sure more news stories will come out with inaccurate information.  Sometimes that is the fault of reporters.  But in many cases, such as this one, the fault lies COMPLETELY with the scientists who use misleading statements in the papers and in the press releases.  Really sad and shameful.

And look.  What a surprise.  The pro- vaping community has picked up the bogus claims and is using them to say vaping is not bad for you. 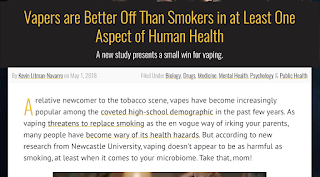 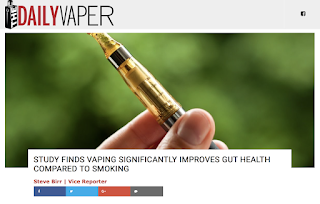 UPDATE 4 - and the BS spawned by this misleading paper continues


There it is stated

As more facts are discovered about vaping and how it affects the human body, new research has emerged showing that using e-cigarettes is highly beneficial to the gut microbiome — microorganisms that live in the intestines and are essential for living a healthy life. As long as these tiny creatures are themselves healthy, that is.

The paper has been corrected. See https://peerj.com/articles/4693/correction-1/

Corrigendum:
After publication, it was pointed out to the authors that some of the language implied causality. In order to avoid potential misinterpretation, they have edited the language by replacing “increased” with “higher”, replacing “decreased/reduced” with “lower”, replacing “changed/altered” with “different”, and removing the phrase “the effect(s) of” throughout the introduction, results, discussion, and conclusion.

They have also removed “From a microbial ecology perspective, this study supports the perception that electronic cigarettes represent a safer alternative to tobacco smoking” from the conclusion in order to avoid language that might be considered as providing medical advice. Similar language was also removed from the abstract’s discussion section.

In the discussion, the authors oversimplified a sentence relating to some species of Bacteroides considered probiotic and to avoid misrepresentation they have also added “though some [Bacteroides] are considered opportunistic human pathogens”.

The authors confirm that none of these changes affect the overall reported associations or the conclusions of the work.

This is a good step.  But of course it does not fix the misleading press that came with their deceptive and  dangerous claims.  And it does not fix all of the issues with the paper.