I was pointed on Twitter to a meeting run by FEBS Letters to "celebrate" their 50th Anniversary.  The meeting has some 20 speakers highlighted of which only one is a woman.

Hey @FEBS_Letters what is your conference speaker policy? This speaker list is not representative of your readership. I wouldn't attend https://t.co/TCEscGT4o1
— Jenny Martin (@Jenny_STEM) February 2, 2018


And I guess in response to criticism they now write

We acknowledge that it is disappointing that there is currently only one female speaker in our line up. The FEBS Letters editorial team based its speaker selection on authors of some of the best papers published in FEBS Letters over the past 50 years, based on citations and downloads. Unfortunately, women are strongly underrepresented in this list, as a result of the fact that women in science were few over the last century. In addition, other women invited to speak at the event were not able to accept the invitation. The result below is thus currently a historical and social reflection of the past 50 years. FEBS Letters is looking at ways to address this.

That is right - for their own meeting they are blaming history and society.  How about this.  How about you take some $#$*()!@#()$!@ responsibility for the meeting you are running rather than blaming society and history for your lack of diversity?  And how about this - I call for a boycott of this meeting. Nobody should help them celebrate when this is their approach. 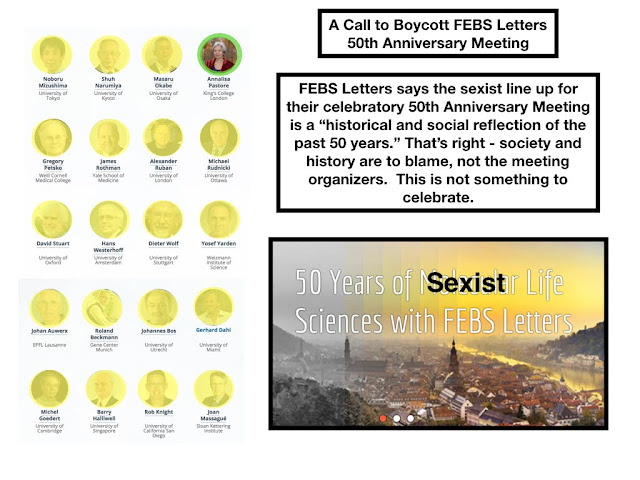 UPDATE - made a Twitter Moment with various Tweets on the topic