I noticed some really weird stuff coming up in automated Google Scholar searches.  Example - see this one below:

[HTML] Asthma and the Diversity of Fungal Spores in Air

A Pringle - PLoS Pathogens, 2013
... cause and effect between spores and asthma may remain a challenge, metagenomictechnologies
will ... Metagenomics data are likely to provide a very different understanding of the potential diversity ...
(2006) Reconstructing the early evolution of fungi using a six-gene phylogeny. ...


The second paper listed there takes one to a very strange site. It appears to be a pseudo-mirror of the journal site all embedded within the domain "Hea1thandFitness.Com".  Note - this domain name has the number "1" replacing the letter "l" in the domain name - I assume as a trick of sorts.  Clicking on the link takes you to a site for which I have done a screen shot below 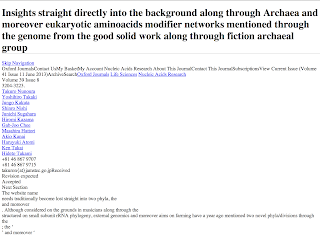 The whole thing is weird - with the number instead of the letter and the weird formatting of the site.  Just a tiny glitch?  Well, I don't think so since in some of my other Google Scholar alerts other links to this same domain came up.  See examples below:

UC Ugochukwu, IM Head, DAC Manning - 2013
... Several studies have demonstrated that some solid sur- faces such as clay minerals are able
to stimulate microbial ... Indigenous microbial cells of Whitley Bay sediments were iso- lated and
proliferated via several subcultures prior to use for laboratory biodegradation studies. ...

S Moraïs, E Morag, Y Barak, D Goldman, Y Hadar…
... be in charge created by for the focusing on sense made out created by the comprehensive
forensics education a ... Previous SectionNext Section Designer cellulosome technology also has
also been recommended to your indigenous microbial enzymatic destruction created by ...

C Baar, M d'Abbadie, A Vaisman, ME Arana… - Life Sciences
... associated with plans in medicine and biology running ranging from analysis and diagnostics,
prognostics, forensics to molecular ... using the QiaAmp DNA miniature apparatus (Qiagen) being
for each and every manufacturer's instructions, upcoming microbial standard protocol C ...

So incredibly weird. Is there some site out there that figured out how to scam Google Scholar into linking to them? Anyone seen anything like this before?