Sort of randomly bumped into this one via Google Scholar Alerts I have set up and being from UC Davis the title caught my eye: New World cattle show ancestry from multiple independent domestication events.  Yes, we think about cows a lot here OK.  And then the second thing that caught my eye were the authors - including David Hillis - who I did not know was working on cattle.  I mean - I knew he lived in Texas - so maybe I should have guessed this was coming at some point.

And then I noticed the first author is someone I follow on Twitter.  Ok - enough.  I got the message.  So I looked over the paper.

Previous archeological and genetic research has shown that modern cattle breeds are descended from multiple independent domestication events of the wild aurochs (Bos primigenius) ∼10,000 y ago. Two primary areas of domestication in the Middle East/Europe and the Indian subcontinent resulted in taurine and indicine lines of cattle, respectively. American descendants of cattle brought by European explorers to the New World beginning in 1493 generally have been considered to belong to the taurine lineage. Our analyses of 47,506 single nucleotide polymorphisms show that these New World cattle breeds, as well as many related breeds of cattle in southern Europe, actually exhibit ancestry from both the taurine and indicine lineages. In this study, we show that, although European cattle are largely descended from the taurine lineage, gene flow from African cattle (partially of indicine origin) contributed substantial genomic components to both southern European cattle breeds and their New World descendants. New World cattle breeds, such as Texas Longhorns, provide an opportunity to study global population structure and domestication in cattle. Following their introduction into the Americas in the late 1400s, semiferal herds of cattle underwent between 80 and 200 generations of predominantly natural selection, as opposed to the human-mediated artificial selection of Old World breeding programs. Our analyses of global cattle breed population history show that the hybrid ancestry of New World breeds contributed genetic variation that likely facilitated the adaptation of these breeds to a novel environment.

There is some really fascinating stuff in here.  And some great figures. 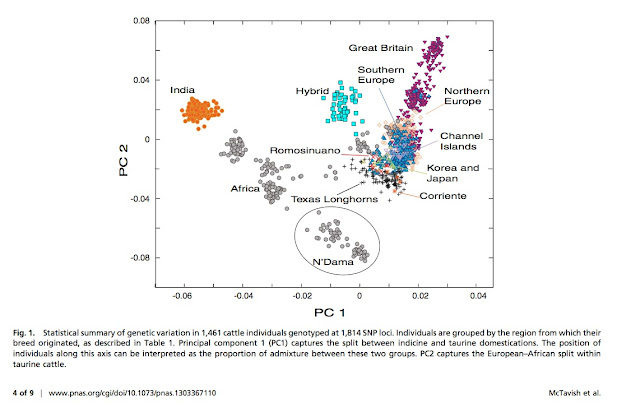 Definitely worth a look if you are interested in cattle, domestication, population genetics, and more ...