I have been tagged by John Logsdon, a supposed friend and colleague of mine in his Sex, Genes and Evolution blog.

Here are the rules:

1. I once bumped into Michael Dukakis (ex governor of Massachusetts and presidential candidate) when he was shopping at a grocery store in Brookline, MA. I was living at my aunt and uncle's house in Brookline for the summer while working for Colleen Cavanaugh at Harvard on chemosynthetic symbionts. Dukakis had a bag of onions in one hand and a bag of garlic in the other. Sort of symbolized his political career at the time. 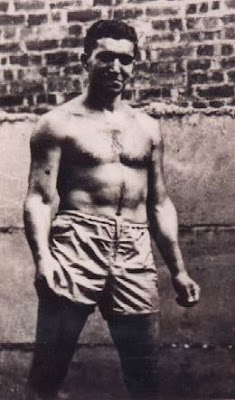 2. My grandfather, Benjamin Post was a physicist (specializing in powder diffraction and X-ray crystallography). When I went to graduate school with plans to work on butterfly population genetics with Ward Watt at Stanford, my grandfather was crushed, because he considered ecology and evolution to be the equivalent of sociology. Not hard science. I kept saying "But we use lots of math" But that did not sell him. It did not help my cause that my brother (who is now by the way an evolutionary biologist), at the time was in grad. school in X-ray crystallography. Then, I decided to not join the Watt lab, and joined the lab of Philip Hanawalt to pursue my dream of working on adaptive/Cairnsian mutation. Thankfully, Rich Lenski convinced me to work on something else. But I stayed in the Hanawalt lab because Hanawalt was the absolute perfect advisor. So when I went to Boston to visit my grandfather and told him I was working on DNA repair and mutation processes, this at least piqued his interest. DNA was after all something physicists worked on. And then I said, "And my advisor, Phil Hanawalt, is in the National Academy and was a biophysicist" my grandfather said "Hanawalt? Is he related to Don Hanawalt?" Turns out, my grandfather worked with Phil Hanawalt's father, J. Donald Hanawalt, who was an expert in powder diffraction. So my grandfather said, not completely in jest, "you may not be doing real science, but at least you are doing it with the child of a real scientist" 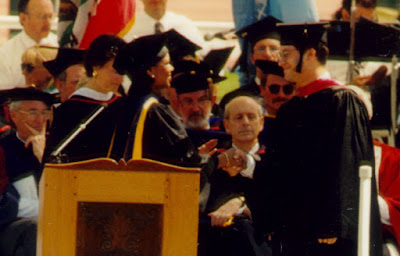 3. I worked with Condoleezza Rice. Not recently. When she was provost of Stanford. On redoing Stanford's Science, Math and Engineering requirements for non science majors. She was great in this role (no comment about her current role. I try to avoid politics here). I really liked working with her (OK, I worked mostly with her office, but I did interact with her a bit.

4. I am one of those people who had a horrible reaction to the SmallPox vaccine. I was 10. We were going to Kenya on a family trip to visit my

uncle David Post who at the time was studying baboons in Amboseli as part of his PhD research with the Altman's. Never mind that he is now a law professor at Temple (and aspiring blues guitarist). Though getting the reaction sucked, it is a GREAT test of my doctor's knowledge and background. When they ask for allergies, I say "Small Pox Vaccine." Unfortunately, most of them are at a complete loss when they read this as they are beginning to talk to me in an appointment. Only the really good ones can discuss it coherently.

5. The best job I ever had was an internship at the Public Defender Service in Washington, DC. It helped me decide not to go to law school but was immensely interesting and fun. I got to go all over the city interviewing witnesses, taking pictures and generally snooping around. Plus the lawyers there were unreal - just *$&%# brilliant. This included people like Bernie Grimm who now is seen regularly on TV commenting on various lawyerly things. But the best by far was Michelle Roberts, who interns used to go to watch in court just because she was phenomenal.

6. I was originally an East Asian Studies major in college. I had studied Japanese in high school and thought for sure that this was the way to make money and get into the business world. Japan was on the rise and I was going to be prepared. Then in college my freshman year I took intensive Japanese classes and some East Asian Studies classes. At the same time I was taking Biology major classes since I was interested in that too. And when I took an Evolution class taught by Stephen Jay Gould (with Wayne Maddison and David Maddison as the TAs), my mind was torn. Do what my intellectual passion told me (Evolution). Or stay in E. Asian studies - which I was not really interested in anymore - but a friend kept telling me I should major in because Mira Sorvino was in some of my classes (this was before I met the even more smashing woman that became my wife). But Gould and team evolution won out. And I switched my registration to Biology as a major.

7. I can't read fiction anymore. I used to love it. And I even wanted to (and I guess still want to) write fiction (I am a co-author on a short story published in Nature -of course, it is not Open Access). But this all changed thanks to Roman Dial, who was a PhD student at Stanford in the Roughgarden lab when I was there. When Roman, who grew up in Alaska, found out we were going on a trip to Alaska, he gave us all sorts of crazy suggestions for things to do. It was only when someone told me Roman was a "crazy" adventurer and friend of John Krakauer's that I read some of his articles from Outside Magazine. First, this taught me that I did not want to do some of the things he suggested we do in Alaska (like getting dropped off on a glacier by some friends of his in Kennicott then hiking down to a river where some other friends would pick us up and go rafting. The hike he said was a few days. When I looked at the map I realized it might take us a month.) But the other thing that Roman did to me was get me reading non fiction outdoor stories. Then when Into thin Air came out, I was hooked (although Krakauer's book Into the Wild is even better). And I have barely been able to read any fiction since. I have however read just 100s of mountaineering, sailing, exploration, travel and other non fiction stories. But other than a wayward Pynchon novel here and there, no fiction reaches out to me. 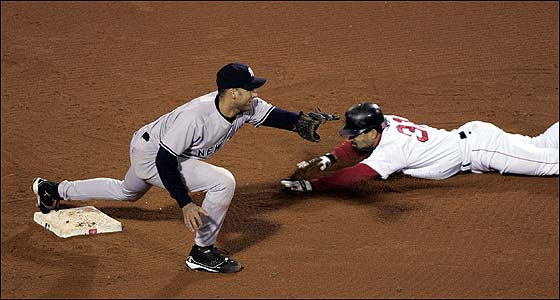 8. I am a RedSox fan. A real one. Not one of these "Ooh, they finally won the Series and now I am going to wear an Ortiz shirt or a hat with a B on it." But one who still feels sick to my stomach when the '86 Series is discussed. And who wants to die when the Boone home run off Wakefield is shown on TV. I was born in Boston and though we moved when I was little, my mom helped make me and my brother into Sox fans. But this pain now comes with joy - finally. I told my friends and family when the Sox were down 3-0 to the Yankees in the ALCS in 2004 that this was the perfect set up for the biggest humiliation ever of the Yankees. And oh what a humiliation it was. I even keep the text messages my brother and I sent back and forth during games just as a reminder. And I had put up a RedSox shrine in my office at TIGR during the playoffs that year so now, being a true Sox fan and thus being superstitious about everything, the shrine is in my new office in Davis. That's me. Keeper of the flame.

And sorry to say, but I have accepted phase one of this tagging but am not keen on phase two (tagging eight people). So after consultation with my lawyer, I have decided that the rules are open to interpretation a bit.

And therefore I tag