Rediscovering some critical terms of use in microbial discussions: #microbiomania and #microbophobia

Earlier this week I was trying to come up with a short term to use when referring to the "Overselling of the Microbiome" and related hype. And I came up with one I really really like: microbiomania. The term just captures the essence of hype about microbiomes to me I guess.

So - of course - the first thing to do was to see if anyone else used this term.  And the number one thing I looked at was domain names.  Nope.  Microbiomania.Com and Microbiomania.Org are now mine.  And then I started to search the interwebs. And surprsingly there was not much (in English at least).  But some links showed up to books in Google Books with passages from > 100 years ago.  And this is when the digging got to be fun.  Here are some of the things I found.

1. A section from "The Medical Era" 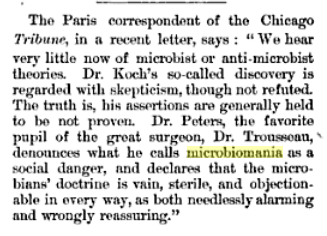 When copying this section of the search results I discovered Google Books has an embed tool for Google Books though not sure how well it works: here is a try

Anyway - the text of this section of the book reads:

So I guess there were some folks who did not like the Koch and his silly theories about germs.


3. The Louisville Medical Journal also comes up with a hit to microbiomania 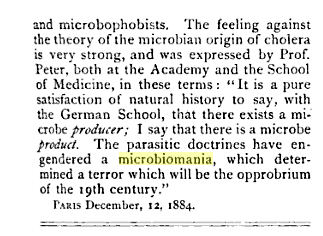 Here is the attempt at an embed:

and the OCR interpreted text reads

Now - nevermind that the OCR is not perfect (where is Faris?).  But not only is this fascinating.  But the beginning of the page has another word that seems worthy of resurrecting: microbophobists,  And this pulls up all sorts of fascinating discussions:

And the related search is perhaps more fascinating: microbophobia

So - in the end I did not come up with a totally new word.  But I do now have two words I really want to use more often and which I will use in the following ways: