Last week David Coil in my lab reminded me that he had been wanting to borrow a copy of "The Immortal Life of Henrietta Lacks" by Rebecca Skloot.  I have read the book many many times and had told David I even had a preprint that Skloot or her publicist sent me before the book came out (I did not know Skloot then - I just got it because of my blog).  As I went to grab the preprint off my shelf in my office he said he wanted to read it know because the genome of the HeLa cells which had been taken from Mrs. Lacks had been published a few days before.  I was shocked.  I asked him if he knew if the authors of said paper had gotten consent before publishing it.  So I opened a web browser and googled and found the paper and some news stories and a press release from the group who did the sequencing.

Holy fuck.  They did not seem to have permission.  Uggh.  I had thought about this a lot because a few years ago I was thinking of writing a review of "The Immortal Life of Henrietta Lacks". As part of that started to write about the possibility of sequencing the HeLa genome and what that might mean.  I also did an April Fools joke relating to the topic: http://therealhela.blogspot.com.  And every time new sequencing technology comes along I have thought about - and discussed with others - the possibility of sequencing the HeLa genome.  And every time I got to this point I decided that it would be unethical, inappropriate, and downright stupid to do this without consent.  Note - my original plans for the book review involved a focus on the strange balance between openness and sharing in the history of HeLa and the lack of consent (e.g., see this blog post).

I was so angry about the lack of consent here that I took to Twitter.


A bit stunned that the people publishing the #HELA genome appear to not have gotten consent from the family g3journal.org/content/early/…
— Jonathan Eisen (@phylogenomics) March 18, 2013


The sequencing of #HeLa genome w/o family consent is appalling - I literally feel like throwing up @downfortylove
— Jonathan Eisen (@phylogenomics) March 18, 2013


And after that there was remarkably little discussion of the issue by others. What the fuck? People get up in arms about all sorts of minor things so why not get up in arms about this? Where were all the supposed genomic ethicists out there? How did this happen? Thankfully, yesterday a piece on the topic came out from Rebecca Skloot (it was in this mornings New York Times) and it has launched this issue into a much more public discussion. So much discussion that I decided to storify it. See below.


Lots of discussions going on out there. And I think Rebecca deserves credit for writing this piece and bringing the story out more. I tried to get people going on Twitter and it was a slog -- people did not seem that interested to be honest. Now - everyone seems interested. Including some who say they agree with Rebecca (and me) that it was a mistake to publish this genome.

Alas, am wondering what these people thought before the Skloot article. Why did so many people just stand by and say nothing? Too busy? Did not occur to them that this could be an issue? Or something else.  Oh - and why did it not occur to Francis Collins and all the people behind encode that this could be an issue. They published a lot of genomic data from HeLa cells and never once asked for consent or apparently even thought about it.

Anyway - it's about time we as a community got off our butts and started discussion how to deal with the ethics of personal genome data.  This data will be coming out more and more.  We need to figure out how to handle it and the consent issues around it.  And we also need to do a better job of figuring out what to do with samples for which consent was not given but which are used.  Should we stop using HeLa cells?  Possibly.  If we want consent to use them - who will give it?  I don't know the answers.  But I do know one thing - science should not simply proceed forward just because these questions are hard to answer.  Publishing the genome without consent or talking to the family was a very very very bad idea given that the ethical issues around consent here are murky. 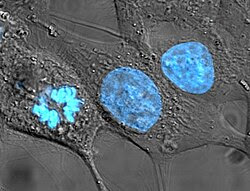 Adding some notes about the press release and genome publication

Genome paper: - some key quotes of interest
Original press release (a copy of which I found here).
Comparison of new and old press release.

UPDATE 2: Some links to other discussions out there on the topic

Rebecca Skloot has unearthed a report from the Presidential Commission on for the Study of Bioethical Issues which few people seem to have been aware of (I have heard nothing about it).


The report was release on October 2012 but got very very little coverage and I have never seen/heard it mentioned anywhere. But it covers a lot of ground of direct relevance to this HeLa story. The whole report is available here. Here are some choice statements (bolding by me)

"Large-scale collections of genomic data raise serious concerns for the indi- viduals participating. One of the greatest of these concerns centers around privacy: whether and how personal, sensitive, or intimate knowledge and use of that knowledge about an individual can be limited or restricted (by means that include guarantees of confidentiality, anonymity, or secure data protec- tion). Because whole genome sequence data provide important insights into the medical and related life prospects of individuals as well as their relatives— who most likely did not consent to the sequencing procedure—these privacy concerns extend beyond those of the individual participating in whole genome sequencing. These concerns are compounded by the fact that whole genome sequence data gathered now may well reveal important information, entirely unanticipated and unplanned for, only after years of scientific progress."

"Whole genome sequencing dramatically raises the privacy stakes because it necessarily involves examining and sharing large amounts of biological and medical information that is not only inherently unique to a single person but also has implications for blood relatives. Genomic information is inherited and determines traits like hair and eye color. Unlike a decision to share our hair or eye color, which does not reveal anything about our relatives that is not observable, a decision to learn about our own genomic makeup might inadvertently tell us something about our relatives or tell them something about their own genomic makeup that they did not already know and perhaps do not want to know. More than other medical information, such as X-rays, our genomes reveal something both objectively more comprehensive and subjectively (to many minds) more fundamental about who we are, where we came from, and the health twists and turns that life might have in store for us."

"Because whole genome sequence information directly implicates relatives, psychological harms often are not limited to the person whose genome is voluntarily being sequenced and publicly disclosed. Even individuals who learn that they do not carry a harmful variant may experience “survivor’s guilt” if another family member is affected."

"At the same time, individuals have a responsibility to safeguard their privacy as well as that of others, by giving thoughtful consideration to how sharing their whole genome sequencing data in a public forum might expose them to unwanted incursions upon their privacy and that of their immediate relatives. To be indifferent to the implica- tions of disclosure of sensitive data and information about one’s self is to act irresponsibly. That being said, it can be good and virtuous to share sensitive data about oneself in appropriate circumstances, for example, for the good of public health research or public education."

"Risks might also fall to blood relatives of these individuals who carry similar genomic variants, thereby raising the stakes of privacy concerns in whole genome sequencing compared with most other types of research."


Wondering if/when ENCODE project will take down their #HeLa genome data since they did not get consent either nytimes.com/2013/03/24/opi…
— Jonathan Eisen (@phylogenomics) March 24, 2013