Just got back from a Sloan Foundation funded meeting in Boulder, Colorado that focused on microbiology of the built environment.  More on that another time.  What I want to tell you about - no - what I need to tell you about - is the entertainment that the meeting organizers arranged at dinner Thursday night.

We had dinner at Red Lion Restaurant - a phenomenally gorgeous spot in the canyon just West of Boulder.  And while we were milling around before dinner I saw out of the corner of my eye a woman walking in to the tent where we were to have dinner.  She was dressed in almost all white and was carrying a giant silver spoon.  So I asked the meeting organizer - Mark Hernandez - if she was the entertainment.  And surprisingly he said - yes - she was a dancer and Professor at Boulder and also did a kind of science performance art.

Her name was Michelle Ellsworth and he said she was amazing.  So I was very intrigued as I am a big fan of mixing science and art.  So I went over to where she had set up and asked her a few questions and took her picture ... 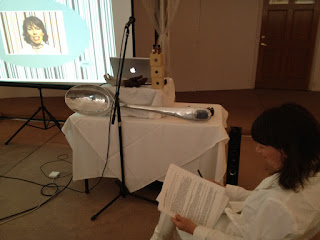 I grabbed a seat near the front of the area they set up for her.  And Mark Hernandez introduced her 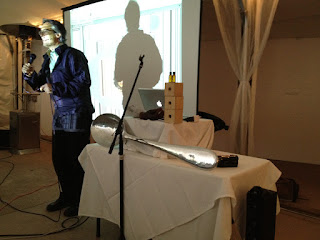 And then I witnessed what I consider to be - seriously - the most entertaining presentation I have ever seen at a conference.  She presented her "Preparation Y" project focused on what should be done to prepare for "the obsolescence of the Y chromosome."  She then proceeded to discuss some relatively recent work on Y chromosome evolution in humans as well as an article about this by Maureen Dowd.   And she posed the questions (tongue planted firmly in cheek ... though done in a style that was remarkably earnest ...)


"What will be missed when men are gone? How can we replace them with choreography, apparati and web technology?"

And then she proceeded to use here web site to take us on a tour of some of the issues associated with the demise of the Y chromosome.

Among the concepts she showed us were devices that can do things that men do that one possibly might miss if men were gone including a greenhouse gas emitter, a toilet seat raiser, a smallerizer, a flinger, and more.  To get an idea of what these were go here and then click on the items on the circle (see screen shot below of the seat raiser). 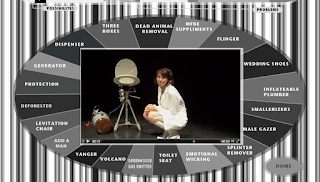 She also had some philosophical discussions of evolution and ecology including pondering the role of men in extinction crises and greenhouse gas emissions and whether men could be considered a "keystone species."  It was a combination of geeky, absurd, sarcastic, genius, and outrageous.  There was even an extensive discussion of man dances and both recording them and reenacting them (the dances were amazing I note)  The funniest part (from my point of view) was the preservation of male artifacts including smells (which she cans like jam), socks (which she said sometimes she adds sugar to to preserve better), saliva, and more.  I note - she said she brought vials to collect some additional male artifacts from the meeting for her collection.  I think I was the only one who donated ...

Some pictures of the "show" are below. 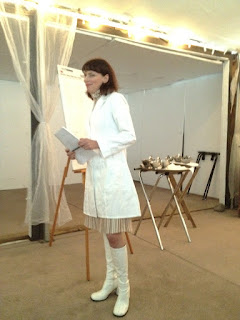 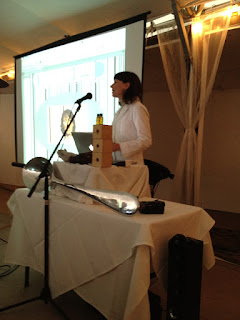 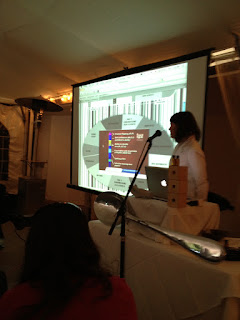 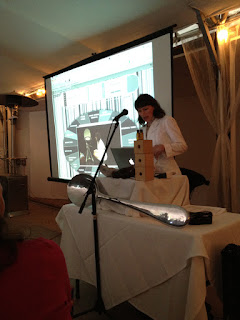 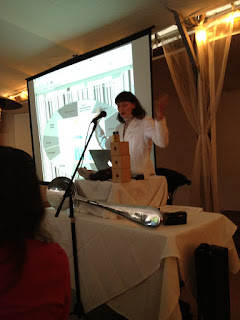 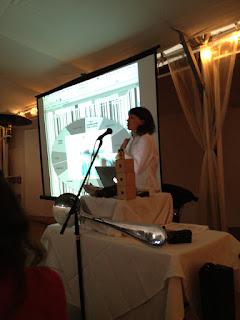 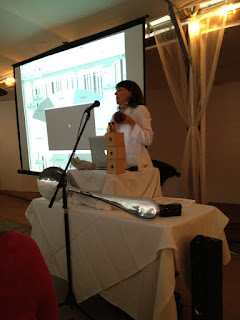 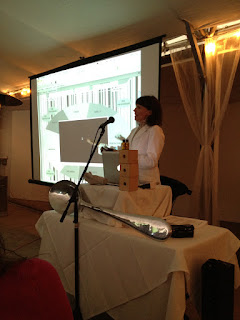 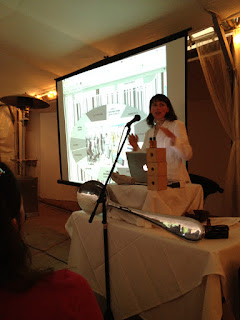 Anyway - if you ever get a chance to see her show or anyone of her presentations, you must do it.  Also consider browsing her website which has some brilliant videos and other materials.

From her website I discovered she has some videos on Vimeo relating to the preparation Y concept.