A few days ago I became aware of the publication of a cool new paper: "Defining seasonal marine microbial community dynamics" by Jack A. Gilbert, Joshua A Steele, J Gregory Caporaso, Lars Steinbrück, Jens Reeder, Ben Temperton, Susan Huse, Alice C McHardy, Rob Knight, Ian Joint, Paul Somerfield, Jed A Fuhrman and Dawn Field.  The paper was published in the ISME Journal and is freely available using the ISME Open option. If you want to know more about Jack (in case you don't know Jack, or don't know jack about Jack) check out some of his rantings material on the web like his Google Scholar page, and his twitter feed, his LinkedIn page, his U. Chicago page. But rather than tell you about Jack or the paper, I thought I would send some questions to the first author, Jack Gilbert and see if I could get some of the "story behind the paper" out of him.  Since Jack likes to talk (and email and do things on the web), I figured it was highly likely I could get some good answers.  And indeed I was right. Here are his answers to my quickly written up questions (been out of the office due to family illness)


1. Can you provide some detail about the history of the project ... How did it start ? What were the original plans ? (not this much sequencing I am sure)


The Western English Channel has been studied for over 100 years, and is in fact it is the longest studied marine site in the world. It is the home, essentially of the Marine Biological Association, and has a long history. The idea to start contextualizing the abundant metadata (www.westernchannelobservatory.org) was started in 2003 by Ian Joint, a senior researcher at Plymouth Marine Laboratory (www.pml.ac.uk), who saw the benefit of collecting microbial life on filters and storing these at -80C. It was his vision to create and maintain this collection that enabled us to go back through this frozen time series and explore microbial life. I started working for PML in 2005, and basically was charged with trying to identify a potential technique to characterize the microbial life in these samples. initially we got funding through the International Census of Marine Life to performed 16S rDNA V6 pyrosequencing on 12 samples. We chose 2007 as the first year, almost arbitrarily, and published that work in Environmental Microbiology in 2009 (http://onlinelibrary.wiley.com/doi/10.1111/j.1462-2920.2009.02017.x/abstract). However, we had already decided to go ahead, and with help from Dawn Field (Center for Ecology and Hydrology, UK) we were able to secure funding to pyrosequence 60 further amplicon samples, essentially we did 2003-2008. We deposited all these in the ICoMM dataset (link below) and it quickly became the largest study in the series. This was also a gold standard study for the Genomic Standards Consortium's MIMARKS checklist (http://www.nature.com/nbt/journal/v29/n5/full/nbt.1823.html). We published the first analysis of these data in Nature Preceedings in 2010 (http://precedings.nature.com/documents/4406/version/1). We continued to characterize the microbial communities of the L4 sampling site in the Western English Channel by employing Metagenomic and Metatranscriptomic along side more 16S rRNA V6 pyroseqeuncing across diel and seasonal time scales throughout 2008 (the final year of the 6 year time series. This study was published in PLoS ONE also in 2010 (http://www.plosone.org/article/info%3Adoi%2F10.1371%2Fjournal.pone.0015545). This study also included our first analysis fo archaeal diversity in the English Channel, which was also funded through the ICoMM initiative. We owe a lot to Mitch Sogin's group for the first attempts at data analysis for the 16S rDNA profiles.  We had a lot of difficulty getting the message right for the 6-year paper that was recently published in ISME J. Basically it was an issue of sequencing data as Natural History, we were generating data catalogs, and not doing enough to characterize the ecology interactions that occurred there.  So we reached out to the community, and found research groups who could help us plug that gap. Those involved Rob Knight's team, Alice McHardy's team, and Jed Fuhrman's team. We worked a lot of improving this paper, and had some valuable help from a wide selection of other researchers, including Steven Giovannoni, Doug Barlett, among many others.
The publication of this study however, is just the start.

2. Who collected the samples? Any good field stories?


Samples were all collected by the fantastic boat staff at Plymouth Marine Laboratory, who routinely go out every Monday morning to collect water and specific samples for the whole laboratory. They were the life blood of that organization. One specific I always like to relate is that during the 2008 sampling season which generated samples for both the new ISME J paper (http://www.nature.com/ismej/journal/vaop/ncurrent/full/ismej2011107a.html) and the 2010 PLoS ONE paper (http://www.plosone.org/article/info%3Adoi%2F10.1371%2Fjournal.pone.0015545), we wanted to get diel sampling effort during the winter spring and summer. Unfortunately the only time I could convince my group to go out sampling for 24 hours was during the summer....some times science is limited by enthusiasm ;-). Also, the site is outside the Plymouth Sea Wall - which I think is still the largest concrete structure in the UK and was built in the 19th century, so taking people out to see the site (for what it was worth ;-)) meant taking them into usually very choppy water....which made people quite sick sometimes. In May 2009, J. Craig Venter and his crew came through to start the European leg of this Global Ocean Sampling expedition at L4, specificallly the Western English Channel. Together, our team at PML on our fishing boat, Plymouth Quest, and his team on-board the 100ft yacht, Sorcerer II sampled L4 and E1 (another monitoring site) in the Western English Channel. Excitingly these data form the first part of the attempt to start cataloguing the viral and Eukaryotic metagenomic and metatranscriptomic analysis of these communities. This analysis is being also further characterized using meta-metabolomics run by Carole Llewelyn at PML and Mark Viant at University of Birmingham. Increasing the multi'omic nature of these data.

3. Can you give some web links for data, people involved , etc?

4. What else do you want people to know ? 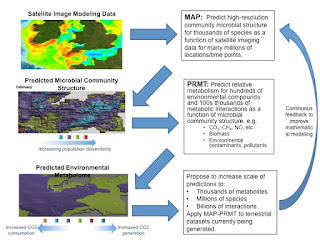 We have recently started to model the English Channel from both a taxonomic and functional perspective. I have attached a presentation that has cool gifs that demonstrate this, people can email me and request the gifs if necessary. These are generated by Peter Larsen at Argonne National Laboratory. This modelling is being driven by two new tools: (1) Predicted Relative Metabolic Turnover, which uses fucntional annotations from metagenomes to create predicted metabolomes, which enable us to accurate predict the turnover (relative consumption or production) of more than 1000 metabolites in the English Channel (http://www.microbialinformaticsj.com/content/1/1/4). (2) Microbial Assemblage Prediction, which enables the prediction of the relative abundance of every bacterial taxon at any given location and time, the predictions are driven by in situ or remotely modeled environmental parameter data. We used satellite data to produce the figures above, truely BUGS FROM SPAAAAACCCCCEEEE..... This is the new paradigm - creating information and predictive models from data - no longer will metagenomics be descriptive Natural History - it is now becoming ECOLOGY. These tools will form the corner stone the Earth Microbiome Project's (www.earthmicrobiome.org) data analytical initiative to create predictive models of microbial taxonomic community abundance structure and functional capability defined as the ability of a community to turnover metabolites.

Note - as a bit of a side story - I am disappointed in the ISME Journals "Open" option for publishing which, though it uses a creative commons license, it is a pretty narrow one that says, for example "You may not alter, transform, or build upon this work." That is pretty limiting.  It means, for example, that the text cannot be reworded into a database of full text of papers where one uses intelligent language processing methods to play with the text.  It also means technically I probably cannot take the figures and modify them in any way to, for example, make an interesting movie using them.  Imagine if Genbank worked this way.  Imagine if you could only look at sequences but could not make alignments of them.  It is, well, not very open. So really this should be called the ISME "No charge" option or something like that since this is not "open access" to me - I think "open access" should really be reserved for material that is free of charge and free of most/all use restrictions (I prefer  the broader version of the "open access" definition described by Peter Suber.).  Sure - the fact that ISME makes some stuff available at no charge is nice.  And that they use CC licenses is good too since these are very straightforward to interpret compared to other licenses.  But their use of the no derivatives option seems silly. Anyway - nice paper.  And I hope some of the story behind the paper is useful to people.