Oakley Keeping his Eye on Evolution

I saw an interesting talk today and thought I would post on it. I was not expecting to be able to go to the talk as I was supposed to be at a workshop in San Francisco but had to bail on it because my kids have been sick. But I did go in to Davis for a brief spell to go to a seminar by Todd Oakley who gave a talk here today.

It was a generally insightful phylogenomic tour of the evolution of opsins and eyes in animals. He also mentioned a paper he had recently in PLoS One on Animal Opsin evolution. This is from the work of his graduate student David Plachetzki and it does a nice job of doing "phylogenomic" analysis in the way I think of phylogenomics -- that is -- a integration of evolutionary and genomic analyses. (NOTE - I think it is kind of lame that people use the term phylogenomics, which I coined by the way, to refer to "using genomes to infer evolutionary trees). It is a paper worth checking out if you are interested in the origin of novelty.

I am putting links here to some of their figures and embedding them in this blog because, well, I can since PLoS One uses a broad Creative Commons license. For example - see Figure 6 from their paper below (the citation is Plachetzki DC, Degnan BM, Oakley TH (2007) The Origins of Novel Protein Interactions during Animal Opsin Evolution. PLoS ONE 2(10): e1054. doi:10.1371/journal.pone.000105).

Figure 6. Ancestral state reconstruction of G protein-binding interactions for each metazoan opsin-mediated phototransduction cascade obtained by simulated mutational mapping [64] (see methods).For each class of opsin, the P value of the reconstructed ancestral G α interactions is represented in pie graphs. Ancestral G protein interactions in phototransduction cascades mediated by ciliary, rhabdomeric and Go opsins can be significantly resolved (P>0.95) but the ancestral states of the rhabdomeric+Go, and cnidops clades are equivocal. ML state reconstructions shown for each node as colored branches. Red, Gi/t; Blue, Gq; Green, Go; Black, no G protein interaction (as is the case for RGR/Retinochrome opsins); Grey, equivocal reconstruction from ML. Reconstructed ancestral amino acid motifs of the 4th cytoplasmic loop region of opsin are shown along branches in logos. Maximum vertical height scales to P = 1.0. We obtained clear reconstructed states for most of the residues in a conserved tripeptide motif (residues 310, 311 and 312, horizontal bar) for the ciliary, rhabdomeric and Go /RGR nodes. For the most part, the remainder of the residues in can be unequivocally reconstructed to the level of Dayhoff classes. B = HRK, X = LIVM, J = GATSP, Z = DENQ.. 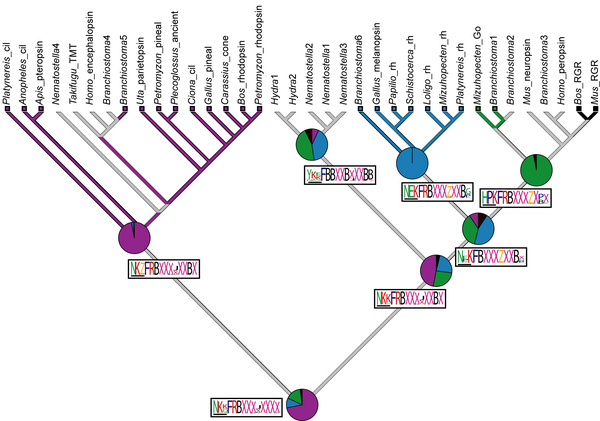 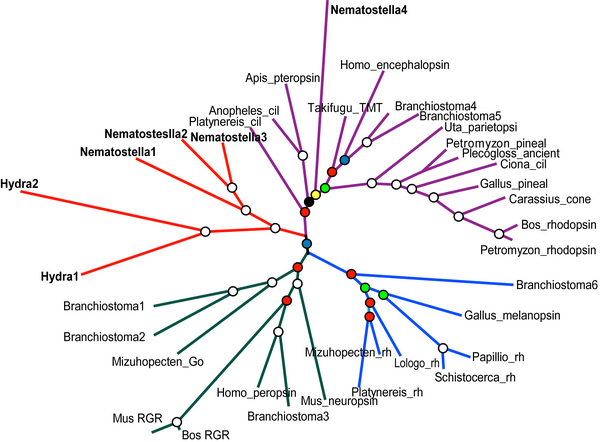 Email ThisBlogThis!Share to TwitterShare to FacebookShare to Pinterest
Labels: phylogenomics, plos one